Rowdy session in House of Reps over leadership change 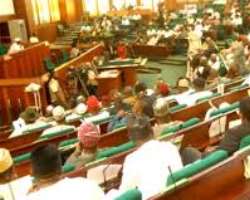 
The first plenary of the House of Representatives  for year 2014 degenerated into a rowdy session as the Peoples Democratic Party and All Progressives Congress (APC) jostle for the soul of the House.

The APC House members were prepared to effect leadership change in the House following the numerical advantage they have gained through the defection of lawmakers from the ruling PDP to APC.


Their plan was foiled by an injunction obtained by the PDP restraining the House leadership from making any such changes.

Aminu Tambuwal, the Speaker of the House had informed members that he was in possession of a court order stopping the change of leadership.

PDP lawmakers who did not find Gbajabiamila assertion funny moved to attack the APC lawmaker, but were prevented by their APC counterparts. Proceeding of the House was held up for over 15 minutes in the confusion that followed with the Reps shouting at each other on top of their voices. It took the intervention of the Speaker who rebuked Gbajabiamila to end the confusion. The APC has been angling for change of leadership of the House since it gained majority with defections of 37 members of PDP to the party just before the lawmakers went on vacation.


According to reports,  APC now has a slim majority of 172 members as against 171 for the PDP in the House. Gbajabiamila was said to have been tipped to become the new majority leader as a result of the loss of majority by PDP in the House to APC.

But a Federal High Court sitting in Abuja had on Monday restrained the House from effecting any change in its leadership. Ruling in a suit filed by PDP, asking for an order of perpetual injunction, restraining the Speaker of the House of Representatives, Aminu Tambuwal, and 52 other lawmakers, from taking any step capable of changing the present leadership structure at the House of Representatives, the Court presided over by Justice Ademola Adeniyi gave a temporary order restraining the House from altering its leadership, pending the determination of the suit brought by the PDP. Justice Adeniyi ordered the House to maintain the status quo until Monday, February 3, when both the substantive suit and preliminary objections from the defendants would be heard.

In the substantive suit, the PDP had asked the court to determine whether, in view of the mandatory provision of Section 68(1)(g) of the Constitution of Nigeria, and in view of the pendency of an earlier suit by the defecting lawmakers, whether the lawmakers could participate in any proceedings to remove the principal officers of the House.

The party also asked the court to determine whether, in view of the provision of Section 68(1)(g) of the Constitution and the pending suit by the defecting legislators, they could lawfully alter the composition or constitution of the House's leadership.

PDP also asked the court to determine whether in view of Section 68(1)(g) of the Constitution and the pending case marked: FHC/ABJ/CS/621/2013, 'the defecting lawmakers could lawfully vote and contribute to any motion for the removal or change of any of the principal officers' of the House.

The party also want the court to declare that the defecting lawmakers, who are also plaintiffs in the suit earlier filed before Justice Ahmed Mohammed of the same court, were not competent to sponsor, contribute or vote on any motion calling for the removal or change in the leadership of the House or the removal of any principal officers of the House.

Meanwhile, APC caucus in the House said after the plenary  that the PDP was  simply delaying the inevitable with the court order it got to stop a change of leadership in the House.

The caucus said that it would abide with the order, though it believed that the order was faulty.

The APC said that it believed in the coming weeks, more lawmakers would defect from the PDP to swell its ranks and show clearly that the APC is the majority party in the House of Representatives.