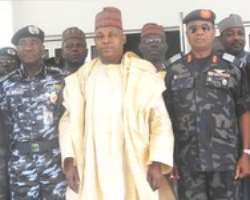 
The Borno Government on Tuesday relaxed the dusk-to-dawn curfew imposed on Maiduguri in December, 2013.

Isa Gusau, the Special Adviser to the State Governor on Media and Communications, said this in a statement in Maiduguri.

Gusau said that the curfew would now be observed between 9 p.m. and 6 a.m. daily.

“Governor Kashim Shettima has approved the review of the dusk to dawn curfew imposed in Maiduguri on Dec. 2, 2013, following an insurgents’ attack.

“Gov.Shettima approved the review after due consultation with security agencies at a Security Council meeting held today at the Government House.

“All citizens are kindly advised to continually cooperate with security agencies by abiding with provisions of the curfew until further notice.

“Individuals and vehicles duly authorised on essential services such as medical workers, rescue fire fighters, ambulances and media personnel on duty are exempted from the curfew,” Gusau said.