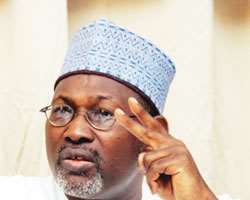 
The Independent National Electoral Commission (INEC) has said that perfect elections  are  not possible in 2015.

The Chairman of the Commission, Prof. Attahiru Jega, stated this   when  the new United States Ambassador to Nigeria, Mr. James Entwistle, visited him in Abuja on Monday.

'We are not promising a perfect election in 2015 but we are confident that we will do our best,' he told Entwistle.

But he quickly added that INEC  had  embarked on the training of its members of staff   'in collaboration with development partners'' as one of the measures to achieve success during the polls.

Other steps, according to him, are  strategic plans and reorganisation of  its  members of staff as well as 'a retreat to finalise the timetable for the 2015 polls.'

He said, 'We are still on the continuous voter register and have held a  series of meetings with security agencies, civil society organisations and development partners ahead of 2015.'

The INEC chairman added that although it  was the responsibility of the commission under the Electoral Act to  carry out  civil and political education, the  issue  had      'always been challenging' because of lack resources.

He said, 'The resources available to discharge that responsibility are usually insufficient, given the enormity of the task of dealing with a large illiterate population and to get them  to  understand what to do not only during voting but the larger issues of costing good candidates and so on. So there is a lot of things the CSOs can do.'

The comment came on the heels of Jega's earlier remark during a recent stakeholders meeting that the 2015 elections would be conducted in February.

Jega  had during a meeting with civil rights groups on November 27, 2013 admitted flaws in the November 16, 2013 governorship  election and the senatorial poll earlier  in Delta State.

He had said that what transpired during the Delta Central senatorial and the Anambra elections were a  reversal of some of the gains  recorded during  the 2011 elections.

Jega had said,  'Anambra State election is an election we fully prepared for. We worked more than we had ever done in any state. Regrettably, however, what we saw was evidence of the reversal in Delta and Anambra states. We are disappointed with the reversals.

'But we are not leaving any stone unturned at unravelling what actually transpired.

'We will investigate Anambra State election thoroughly  and meticulously. We will do a thorough enquiry. We cannot afford to lose hope. We will do better in the future.'

Earlier, the US envoy  had said the  White House  was committed to transparent elections in Nigeria  in  2015.

He said, 'I have been here for two and half months and I am here to   pay my respect to the chairman of Nigeria's election commission because as I have stated clearly in some of my public comments, as Nigerians move to elections next year, my government and the people of United States stand with the people of Nigeria as they move towards a peaceful and transparent election which the Nigerian people deserve.

'Obviously, we will work very closely towards the US support for this election.'

The areas of assistance, Entwistle said, include supporting  Nigerians and observer groups.

'We just met inside to decide what to do and focus on things like polling the capabilities of INEC, perhaps supporting indigenous Nigerians and observer groups. Very soon, we will get back to you with the details'.

He said, 'The funding of INEC is a Nigerian matter and that of the National Assembly. But we are looking at a way we can help INEC through different technical funds and so on.'

Entwistle  also advised  the political class against   provocative statements ahead of the 2015 elections.

He said, 'In any election campaign, obviously freedom of speech is very important. But in all countries in the world, including my own country, politicians have a responsibility to be responsible in what they say. In talking about the issues, they should be very fair in what they say.

'Any comment by anybody, talking about democracies all over the world that will flare up ethnic tensions, promote violence and engage in unfair criticism of the process is very unfortunate and it is not acceptable.' - Punch.