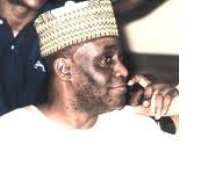 He died on Sunday after a partial stroke at the Kirikiri Maximum Prisons in Lagos. He was aged 42.

DSP Biyi Jeje, the spokesman for the Nigerian Prisons Service, Lagos Command, confirmed this to the News Agency of Nigeria (NAN) in Lagos.

Jeje said that Tijani died at about 9.00 am in the clinic of the maximum prison.

He said that the service had earlier invited the state officials to examine Tijani's health in December for possible transfer to another hospital.

According to him, a team of medical experts were sent to the prison by the Lagos State Government before Christmas to examine him, but the outcome of their findings was not made available.

Tijani, a citizen of Niger Republic, was arrested sometimes in September 2003 in Cotonou, Benin Republic, and moved to Abeokuta, Ogun State, briefly before he was transferred to Kirikiri.

The deceased spent 11 years in prison custody while his trial was still ongoing before his death.

The defendant had through his lawyer, J. H. Bashir, filed a “no case submission'' and asked the court to discharge and acquit him for lack of diligent prosecution.

His request was, however, refused by Justice Nwaka in a ruling delivered on Oct. 23, 2012.

However, the trial was stalled again on the adjourned date as the court did not sit and the case was further adjourned till May 9.