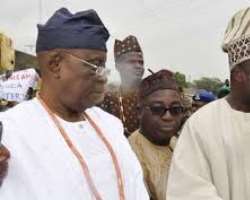 
Police in Ogun State have begun investigation into into recent violent activities of the All Progressives Congress, APC in the state.

The  investigative team is  led by the Assistant Commissioner of Police in charge of investigation, Aminu Alhassan.

The Public Relations Officer of the Command, Muyiwa Adejobi, in a statement said the Commissioner of Police, Ikemefuna Okoye, constituted the team after a brief meeting with top officers of the Command.

According to the statement, the commissioner also ordered the team to arrest or invite those concerned or indicted in the fracas. Okoye gave the committee one week to submit its report.

The Commissioner expressed disappointment in those that cast aspersions on his men, stating that some policemen were also wounded.

Ikemefuna, therefore, implored the political class to play their game with decorum and in line with the ethics and dictates of the game, assuring that whoever is found culpable in the issue will be sanctioned accordingly.

Obadara told newsmen that he was about to inaugurate a N32 million women and youth centre when sponsored hoodlums stormed the venue.

Calling on the police to investigate the incident, Obada appealed to his supporters to remain calm and law abiding in the face of the 'unwarranted provocation,' instigated by the state governor, Ibikunle Amosun.

He disclosed that petition would be forwarded to the Inspector-General of Police, to 'naturally investigate the incident,' adding that 'Wherever fire arms were used as was the case last Thursday, the topmost echelon of the police must come in.'

In his reaction, Senator Adegbenga Kaka, represent Ogun East, said the incident has confirmed the fear that the lives of APC chieftains were under threat.

He recalled the fracas at the secretariat of the party in Abeokuta about two weeks ago, which left some journalists and party members injured.

The lawmaker stated that 'The ugly incident was unfortunate. The security agencies must move fast to arrest the situation. Ogun State people don't deserve this barbaric act. The media and innocent citizens of the state are being attacked with impunity. We hope that the police and other security agencies will get to the root of the matter.'

Kaka said Governor Amosun cannot claim honesty in the matter, as he was bent on dealing with those perceived to be against his second term bid.

But the governor's camp has denied allegations of culpability, advising party chieftains to watch their utterances.

Amosun's Media Adviser, Sola Balogun, said his principal, being a peace-loving man, can never be involved in violence as he was busy working hard to deliver the dividends of democracy to the people of Ogun State.

He warned against bias and inciting comments that may jeopardized the peace and stability of the state.