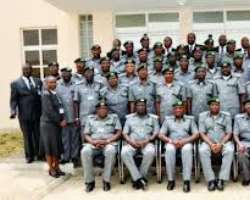 It said that the new appointment is as part of ongoing restructuring in the service.

Wale Adeniyi, NCS' spokesperson,in a statement, said the new appointments were approved by Customs Board in a meeting presided over by the Minister of Finance and Coordinating Minister of the Economy, Dr Ngozi Okonjo-Iweala.

According to the statement,  the new appointments were carried out in tune with Federal Character Principle of representation in public service.

He said that  each of the new DCGs was appointed from each of the six geo-political zones.

'The Nigeria Customs Service Board has approved the restructuring of the Service Management. The restructuring is one of the highlights of the Board Meeting presided over by the Minister of Finance.

'Under the new arrangement, the management has been re-constituted to reflect the Federal Character Principle of representation.

'Accordingly, the new Management comprises six Deputy Comptroller-Generals, with one appointed from each of the six geo-political zones of the country,' the statement said.

The statement said that the five DCGs would join John Atte, a serving Deputy Comptroller-General from Bayelsa (South-South), who was already on the Management Board.

Those appointed to the rank of Assistant Comptroller-General, as stated in the statement were: Dan Ugo from Benue, Patience Iferi from Cross River, Austin Warikoru from Bayelsa and Robert Alu from Nasarawa State.

It was also revealed in the statement that the NCS Board has ratified the voluntary disengagement of three Deputy Comptrollers-General, Garba Makarfi, Dr Daniel Jatau and Yinusa Saka from service.