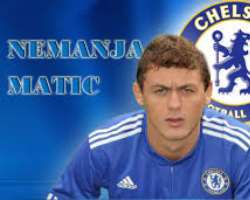 
Mikel may be in real trouble at Chelsea as the club has finalised a deal for  Serbia international Nemanja Matic, a defensive midfielder from Portuguese team Benfica.

Chelsea coach Jose Monrinho, who during his first term at the London Club converted Mikel from an attacking midfielder, to a more defensive role, has not bestowed confidence on the Nigerian international in this his second coming at Chelsea.

Mikel has not been adventurous enough on that role, which makes Monrinho keep him as a second resort.

Matic says he has played his last game for Benfica, a 2-0 win over Porto, and has agreed a five-and-a-half year contract with Jose Mourinho’s side

Nemanja Matic is set for a Chelsea medical on Tuesday after agreeing the terms of a â‚¬24 million move from Benfica.

The Serbia international has confirmed that he has played his last game for the Portugese club as he prepares to become the Europa League champions’ first signing of the January window – providing he is given a clean bill of health. Speaking to Portugese newspaper A Bola about last Sunday’s clash with Porto, Matic said: “Yes, it was my last game. I want to thank all the people at the club and all the supporters. Benfica will be forever in my heart. I played here two-and-a-half years, I gave my best in every practice, every game, and now is the right time to leave.”

Negotiations to take Matic back to Stamford Bridge were finalised between Chelsea and Benfica in Lisbon on Monday.

Chelsea are believed to have agreed to pay Benfica an initial â‚¬22m, rising to â‚¬24m with add-ons. Matic, 26, has agreed the terms of a five-and-a-half year contract.

The midfielder first moved to Stamford Bridge in 2009 for â‚¬1.8m and was then sold to Benfica two years later as a makeweight in the deal that brought David Luiz to the club. At that time, Matic was valued at around â‚¬3m.

The re-signing represents a huge mark-up for the west Londoners but manager Jose Mourinho regards Matic as the type of midfield anchorman the team has been lacking for several years.

Matic explained that he felt it was the right time in his career to move to a club regarded as one of Europe’s elite.

“I have always given my best for the team, the club and the supporters. I hope you recognise that and understand my position and my desire.”

Tall, athletic and comfortable with the ball at his feet, the Serbian will be expected to slot straight into Mourinho’s squad for Sunday’s home clash against Manchester United.

The Europa League champions expect to partly fund Matic’s transfer with the funds from Kevin de Bruyne’s sale to Wolfsburg, with the Belgian on the verge of a â‚¬18move to the Bundesliga.

Mourinho has been keen to buy a proven defensive midfielder since returning to Stamford Bridge last summer and finding a squad overloaded with playmakers and light in the central areas.

With defender Luiz regarded as a last resort in midfield, Frank Lampard out of contract in the summer and Marco van Ginkel sidelined for the season with a cruciate ligament injury, strengthening in that area has been regarded by the Blues as a priority.