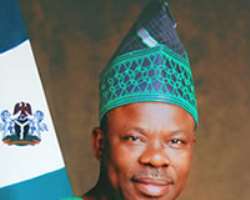 
Gov. Ibikunle Amosun of Ogun on Friday apologised to journalists and residents of the state, who were brutalised at the All Progressives Congress secretariat in Abeokuta, the state capital.

Violence broke out when some hoodlums stormed the party secretariat to disrupt the inauguration of the harmonisation committee of the party.

Some journalists, who were there to cover the event and some residents, were attacked.

Speaking during a press conference in Abeokuta, the governor attributed the incident to a communication gap between members and the leadership of the party.

'What happened yesterday is avoidable, and unnecessary; I believe, truly, that it was due to communication gap,'' he said.

Amosun explained that the scheduled event at the secretariat had been postponed, but that the information was not communicated to all the members.

The governor said his government had no hand in the incidents but assured that his administration and the party leadership, would take adequate measures to avoid a re-occurrence.

Amosun, who dismissed insinuations that the party was factionalised, warned politicians to treat journalists with honour and respect during political gatherings.

He acknowledged that the former governor of the state, Chief Olusegun Osoba, was a respected leader of the party, adding: 'there is no quarrel between us as widely rumoured.'

The governor advised members to participate in the membership registration exercise, which would commence on Monday. NAN