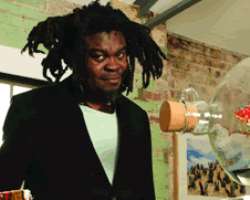 In a few weeks' time, history will be made in London, when the artwork of an African, Yinka Shonibare, will be commissioned for exhibition at London's Trafalgar Square in the British Capital. It will be the first of its kind by any black artist, dead or alive.

According to the Mayor of London, Boris Johnson, the next commission for the world famous Fourth Plinth in London's Trafalgar Square – Nelson's Ship in a Bottle by leading Anglo-Nigerian artist, Yinka Shoninbare, will be formally unveiled on Monday May 24.

The work
Set in a giant bottle, the five- metre long and 2.5 metre high scale replica of Nelson's flagship HMS Victory will link directly with Nelson's column, located just metres away at the front of the iconic square.
The artwork will be the first commissioned on the Fourth Plinth to reflect specifically on the historical symbolism of Trafalgar Square, which commemorates the Battle of Trafalgar, and is also the first of such commissions by a black artist. The work was commissioned by the Mayor and sponsored by Guaranty Trust Bank of Nigeria.

According to the organisers, the ship's 37 large sails will be made of exuberant and richly patterned textiles commonly associated with African dress and symbolic of African identity and independence. Commenting on the work, Johnson said: “Set against the backdrop of one of the most iconic symbols of Britain's seafaring heritage, Shonibare's ship, with its riot of colour, makes a powerful statement that will intrigue and inspire in equal measure.

“It is a stunning work, with history and culture from West Africa to East Asia, woven in its sails, much as the threads of those places and their people are woven in the fabric of the capital. It is also particularly timely, with its message of the complex relationship between Africa and Europe coming as Nigeria marks its 50th year of independence.

Celebration of wealth
Speaking on his work, Shonibare says his piece will reflect the story of multiculturalism in London: “For me, it's a celebration of London's immense ethnic wealth, giving expression to and honouring the many cultures and ethnicities that are still breathing precious wind into the sails of the United Kingdom. A ship in a bottle is an object of wonder. Adults and children are intrigued by its mystery. How can such towering masts and billowing sails fit inside such a commonplace object? With Nelson's Ship in a Bottle, I want to take this childhood sense of wonder and amplify it to match the monumental scale of Trafalgar Square.”

Sponsorship
The proposed exhibition is being bankrolled by Guaranty Trust Bank Plc. Speaking on the event, the bank's CEO , Mr Tayo Aderinokun, said: “We are extremely proud to be sponsoring a unique artwork for an iconic location by such an accomplished Anglo-Nigerian artist. Yinka's work is being exhibited in the same year as Nigeria celebrates the 50th anniversary of its independence. The multiculturalism of London is a key component of the legacy of colonialism, and we hope that this high-profile and important work helps to create a similar debate in Nigeria in such an important year.”

The artist
Shonibare was born in London and moved to Lagos, Nigeria, at the age of three. He returned to London to study Fine Art, first at Central Saint Martin's College and then at Goldsmiths College, where he received his MFA, graduating as part of the 'Young British Artists' generation. He currently lives and works in the East End of London.

Over the past decade, Shonibare has become well known for his exploration of colonialism and post-colonialism within the contemporary context of globalisation.
His work explores these issues, alongside those of race and class, through the media of painting, sculpture, photography and, most recently, film. Using this wide range of media, Shonibare examines in particular the construction of identity and tangled interrelationship between Africa and Europe and their respective economic and political histories.

The Fourth Plinth
The Fourth Plinth Programme is funded by the Mayor of London and Arts Council of England and sees new artworks being selected for the vacant plinth in a rolling programme of new commissions. The scheme was initiated in 1998 by the RSA with the support of the Cass Sculpture Foundation. In 1999 responsibility for Trafalgar Square was transferred to the Mayor of London and the Greater London Authority.

The first new commission for the Fourth Plinth under the auspices of the Mayor of London's Fourth Plinth Commissioning Group was Marc Quinn's sculpture, Alison Lapper Pregnant, unveiled in a public ceremony in September 2005. It was replaced in November, 2007 by Thomas Schutte's Model for a Hotel and in 2009 by Antony Gormley's One & Other. Previous commissions have been Ecce Homo by Mark Wallinger (1999), Regardless of History by Bill Woodrow (2000) and Monument by Rachel Whiteread (2001). Arts Council England has been a funding partner supporting the programme since 2003.