I will remain as CBN governor till June 1, Sanusi says 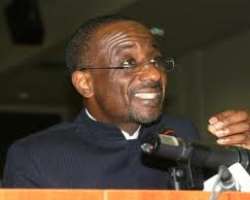 
The embattled Central Bank of Nigeria (CBN) Governor, Mallam Sanusi Lamido Sanusi, has allayed concerns over his departure, informing his staff that he will remain in office till June 1 when his tenure as governor expires, THIS DAY   reported.

According to the newspaper report, Sanusi met with the staff of the central bank Wednesday to inform them that his earlier decision to go on terminal leave in March had been rescinded and that he was prepared to stay out his tenure.

Sanusi's meeting with his staff took place a day after President Goodluck Jonathan had asked him to resign on the grounds that he leaked the letter that he had written to the president on the unremitted $49.8 billion oil revenue to former President Olusegun Obasanjo.

But Sanusi immediately denied the allegation and refused to step down, reminding the president that he could only be removed by two-thirds of the Senate.

However, owing to the impact on the financial markets and the macroeconomy, well-meaning Nigerians who were also concerned that Sanusi’s forced departure could send the wrong signals to the international investment community, moved promptly to appeal to the president to rethink his demand that the CBN governor should resign.

THIS DAY further reported that their intervention was able to lead to a rapproachment, during which Sanusi affirmed his respect for the Office of the President and the president,  as well as his desire to continue to work in the interest of the federal government until he steps down on June 1.

With the resolution of the matter, a source in the presidency said that an orderly transition would commence on March 1, paving the way for the appointment of a new CBN governor who would take over from Sanusi.

During the meeting with the CBN personnel, Sanusi made it official that he was no longer going on terminal leave and would remain in office till June 1. He was also quoted as saying that it is only a two-thirds majority vote in the Senate that can unseat him.

Sanusi’s position is supported by the CBN Act, which stipulates how an incumbent governor can be removed from office.

Section 11(2)(f) of the Act states: 'A person shall not remain a Governor, Deputy Governor or Director of the Bank if he is removed by the President: Provided that the removal of the Governor shall be supported by two-thirds majority of the Senate praying that he be so removed.'

Expectedly, the face-off between the president and Sanusi, which was exclusively reported by THISDAY yesterday, elicited mixed reactions and disbelief among critical stakeholders in the financial system, the political establishment and lawyers.

Financial market experts who spoke to THISDAY on the development, however, expressed divergent views over the directive by Jonathan that Sanusi should immediately resign over the leaked letter to Obasanjo.

The reactions ranged from disbelief to muted concern for the financial markets and investors’ reactions to sign of instability. Most respondents who spoke said the development was unnecessary since the governor is just months away from finishing his tenure.

They said the ongoing drama was enough distraction to hurt the economy and could affect the monetary policy committee (MPC) meeting of January 20. For instance, equity traders in London, who spoke to THISDAY, said they are watching developments with keen interest. For now, there is likely to be no impact, they said. If, however, Sanusi is forcibly removed, Nigerian equities will tank.

Emerging Markets Strategist at Standard Bank, London, Samir Gadio said the development would mean the next CBN governor must be a close ally to the government, thereby losing his independence.

'While the above mentioned development has yet to be publicly confirmed, we suspect the risks that the next CBN governor will be a closer ally of the current administration – and less independent for the central bank.

'This may not necessarily mean that the new governor will depart from the central bank's historic forex stability stance, especially given the currency's critical relevance in the forthcoming elections, but there may well be concerted political pressure to lower policy rates and shift to a more expansionary monetary regime ahead of the next elections,' he said yesterday.

Also speaking to THISDAY, the Managing Director/Chief Executive Officer, Cowry Asset Management Limited, Mr. Johnson Chukwu, said the objective of trying to forcibly remove Sanusi was to make him pay a price for the injury he inflicted on the presidency by that letter.

Chukwu said: 'The truth is that the presidency went through a period of difficulty when that letter came out and they might have felt that there are several channels that he (Sanusi) could have used in presenting that figure to the president, given that he is a member of the Economic Management Team.

'What they are trying to do is to obviously hit back at him and obviously destroy his reputation as a central bank governor because once he is forced to resign, it will be on the record that his tenure was truncated because he actually blew a wrong whistle.'

On the other hand, the managing director of a bank, who pleaded anonymity, said there was no need to force Sanusi out of office since he had less than five months to the end of his tenure. 'If the man's tenure is coming to an end soon, why do we need to go through all that? What purpose would that serve? The economy already has enough difficulties and we should not overheat it. If it is something we can avoid, we should avoid it,' he added.

But the Chief Executive Officer, Institute of Credit Administration (ICA), Dr. Chris Onalo, pointed out that the central bank is an agent of government and the appointment as a CBN governor is political.

He argued that if the president feels that what the governor did by writing the letter had portrayed his government in bad light, there was nothing wrong in calling for his immediate resignation.

'If the president is not pleased with his conduct, he has the right to call for his resignation ahead of his due date of retirement.

'I don't think it will have any effect on the economy. But there should be need to sustain what has been done at the central bank,' Onalo argued.

Also, a renowned economist, who pleaded anonymity, said: 'I believe the Senate will not go to the extent of ratifying the sack of the governor since he has just few months to go. It is unnecessary distraction.'

The Labour Party (LP), on the other hand, called on Sanusi to resign if he no longer commands the confidence and trust of the president.

The party’s National Chairman, Chief Dan Nwanyanwu, in a telephone interview with THISDAY expressed disgust at the alleged altercation between the CBN governor and the president over the latter’s handling of confidential policy issues.

'My worry is that they are desecrating the Office of the President. I read from the newspaper this morning about the alleged exchange between Mr. President and the Governor of Central Bank.

'As far as I am concerned, the CBN governor was appointed by Mr. President and was only confirmed by the Senate and if the President is no longer satisfied with his performance, he reserves the right to boot him out,' he said.

The LP chairman said he had reservations over the way the CBN governor carries on with his duties, adding that Sanusi had turned his office into a political rendezvous. On its part, the All Progressives Congress (APC) urged the president to tread softly on his reported plan to force Sanusi to resign because of the impact this would have on the nation’s economy.

In a statement issued in Lagos yesterday by its interim National Publicity Secretary, Alhaji Lai Mohammed, the party said asking the CBN governor to step down, on the basis of a mere allegation that he leaked the letter he wrote to the president, does not bode well for an economy that is already on crutches.

The party warned that any move to suspend Sanusi and use security forces to prevent him from entering his office, as reported by the media, would even be worse, because it would mean that the president is willing to circumvent the provision of the law that the governor can only be removed by two-thirds of the Senate.

APC further warned that suspending Sanusi would be a replay of the damage that the president caused to the judiciary when he suspended Justice Ayo Isa Salami until his retirement, and could easily re-enact the same scenario if, for example, he feels that the INEC chairman has offended him.

'Our worry here is that the president should not destroy our institutions before he leaves office,' the party said.

Also reacting, renowned constitutional lawyer, Professor Itse Sagay (SAN), said if Sanusi was billed to retire in March, 'what's the rush to get him out? He alleged that $49.8 billion could not be accounted for and after the investigations they said it was $10 billion, even though the $49.8bn could have been exaggerated really.

However, Nigeria's former High Commissioner to Ghana, Senator Musiliu Obanikoro, thought Sanusi had lost every moral and professional right to continue to stay in office as CBN governor.

According to him, 'Sanusi should resign and go. There is nowhere in the world where a CBN governor would write such a letter and not resign the next day. Having written the letter, verifications were made and he also admitted to some errors, then he has no business being the president's adviser again.

'To accuse those agencies of mismanaging such money was damning and he later admitted to the fact that his claims were fraught with inaccuracies. That was balderdash! If someone claimed that such a huge sum of money was missing - $49.8bn - an amount that could almost be a budget of the whole country and coming from the CBN, it smacked of betrayal and to me, it was sabotage.'