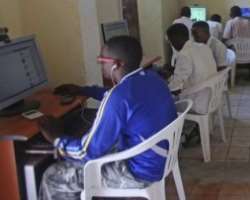 
Internet cafes are popular in the capital, Mogadishu

The al-Qaeda-linked al-Shabab group has given firms 15 days to shut down mobile internet and fibre optic services, which are due to launch soon.

Those who do not comply would be seen as 'working with the enemy' and dealt with according to Islamic law, it said.

Correspondents say the group often executes those it accuses of spying for Somalia's government or Western powers.

Al-Shabab was driven out of the capital, Mogadishu, in August 2011, but still controls many southern and central areas of the country. BBC