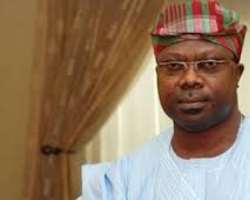 
The Peoples Democratic Party (PDP), Osun State chapter on Wednesday, in Osogbo named three gubernatorial aspirants on the platform of the party, who have indicated interest to vie for its ticket.

The chairman of PDP in the state, Alhaji Ganiyu Olaoluwa, said the three aspirants were those who met the  December, 2013 set by the party as deadline for the submission of expression of interest.

All aspirants were required to pay N5million expression of interest fee by the party.

The party chairman assured the party faithful that it would organise free and fair primary election by giving all the aspirants level playing ground to pursue their ambitions.

Olaoluwa took a dig on the All Progressive Congress (APC)-led government of Governor Rauf Aregbesola, accusing it of subjecting the people of the state to untold hardship, harrowing poverty and deprivation.

He  said PDP was ready to salvage the Osun indigenes after the conduct of 2014 governorship poll.