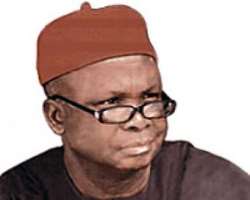 
The five megawatts Ebonyi biomass gas turbine project being executed in collaboration with the UN Industrial Development Organisation (UNIDO), is to gulp 15 miIIion dollars, according to an official.

Chief Ben Okah, the Commissioner for Public Utilities, told newsmen in Abakaliki on Wednesday that it was one of the projects the government was collaborating with the organisation which agreement was signed in November 2013.

'The project came into being after researches conducted by UNIDO on the environmental impact of the Abakaliki Rice Mill.

'It was discovered that several lives were lost to burns from the heat of the rice husk as those who excavated rice inside the husk got burnt unknowingly.

'UNIDO then informed the government that it was possible to covert the husk into power, using the biomass turbine technology,' he said.

The commissioner said it was for the government's policy on environment that the project was sited at Ikwo near one of the modern rice mills inaugurated in the state.

'The gas turbine will use the husks from the mills to generate power that will contribute to the rapid development of the state.

'The five megawatts to be generated will be enormous as the mills will use two megawatts while the Oferekpe water scheme will use 1.5 megawatts the balance will go the nearby areas,' he said.