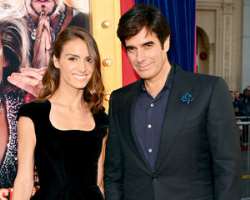 
David Copperfield is a happily engaged man! The 57-year-old magician is set to wed 28-year-old girlfriend Chloe Gosselin, the mother of his 3-year-old daughter, Sky.

The famous illusionist revealed he is off the market while reminiscing about his past six-year romance with Claudia Schiffer during a recent interview with Hello! magazine. “Oh, that was a long time ago,” he said of dating the supermodel in the 1990s. “Now I’m engaged and in a committed relationship with Chloe in my mind and my heart.”

Cooperfield and Gosselin, a French model and designer, have been dating for six years. They welcomed their first child together, daughter Sky, in spring 2010.

“I’m so lucky to have found David,” Gosselin told Hello!. “There are very few people in the world like him. He’s spent more than 30 years at the top of his profession. He’s achieved some extraordinary things.”

The couple live in Copperfield Bay, an archipelago of 11 islands in the Caribbean. Penelope Cruz and Javier Bardem reportedly held their secret wedding on one of the islands in July 2010.

“Because of my work I have the privilege of living in extraordinary places around the world,” Copperfield explained to the magazine. “And I wanted to recreate the details of those experiences here — from the water pressure in the shower to the thread count in the towels.”