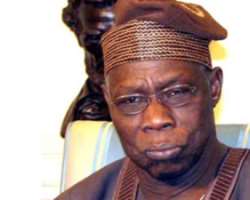 
Former President Olusegun Obasanjo  on Tuesday  said  he was unperturbed by recent attacks on him by presidential aides and a former Federal Commissioner  for  Information, Chief Edwin Clark,  because of the letter he wrote to President Goodluck Jonathan.

Obasanjo, through his media aide, Mr. Tunde Oladunjoye, also said he was ready to meet with the Peoples Democratic Party's Board of Trustees (BOTs) members, over his reported feud with the President.

Insisting  that he was not at war with Jonathan, Obasanjo said he  was unfazed by the letter written to him by Clark  and the rantings and abuse by the President's aides.

The  Ijaw national leader had in his letter  dated January 3, described the former President as an unrepentant troublemaker,   liar and manipulator.

In the 10-page letter titled, 'Let The Truth Be Told Before It Is Too Late,  Clark   said, 'Mr. former President, I will also like to use the language of your daughter, Iyabo, to describe you to Nigerians.

'You are 'a liar, manipulator, two-faced hypocrite…. You  have egoistic craving for power and live a life only men of low self-esteem and intellect thrive.'

But Oladunjoye said that Obasanjo was not disturbed by insults and abuses being hauled at him because of the December 2, 2013 letter to Jonathan.

The media aide said, 'I was with him (Obasanjo) this (Tuesday) morning in Abeokuta for about five hours. He received some visitors. He was full of life. He was in high spirits. He was playing  Ayo game.  He bears no one no grudge.

'After being with him for about five hours, he told me, 'Tunde I want to go and sleep.' That means he has not lost sleep, regardless of abuse, rantings and insults. If I am to use his words,  I will tell you that Baba still dey kampe.'

On the plan by the PDP's BoT to settle the rift between Obasanjo and Jonathan, he said that the ex-President had received the BoT members in the past, adding that he was ready to receive them  again.

Oladunjoye said,  'I want to tell you that Chief  Obasanjo   is not at war with anybody, including President Jonathan.

'He has always maintained that his doors are open to all Nigerians, regardless of political affiliations. If members of the BoT decide to visit him, it will not be the first time. If he is in the country, he will receive them.' - Punch.