I Am Disappointed In Basket Mouth Facebook Joke "Greg Ighodaro" 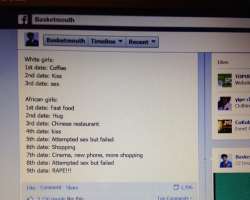 Listen to article
I am highly disappointed in Nigerian foremost comedian Basket mouth aka "Bright Okpocha with the very "foolish joke" he cracked on his Facebook wall, making RAPE the highpoint of his Joke, The joke started with a comparison of African girls and while girls on a date where you diminished the African Woman to nothing if taken on a date.Would your joke be funny if your mother your sister, your aunt, your daughter had been raped? If you daughter or your sister had come home with blood running down her legs because some brute had seen her, not as a human being with feelings and a physical body that hurts and bleeds, but as a vessel for his lust, his rage, his disrespect and his misogyny? Its sad to see over five thousand young people "Like" that post, you are meant to be an advocate of good behavior, an ambassador to young people, a voice for several women (some have gone through one form of sexual abuse or the other) out there who buy tickets to your shows and support your work not the other way round. We deserve more respect than what he made out of us! Here is a munch screen of the post: