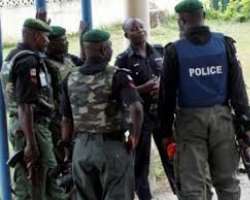 
The Kaduna State Police Command on Saturday in Kaduna paraded seven suspected members of a gunrunning syndicate involved in the sale, manufacture and repair of locally made guns.

The Commissioner of Police, Mr Olufemi Adenaike, said that the suspected gun-runners were arrested following a tip-off from a member of the public.

Adenaike said that seven suspects, including Malam Aliyu Yahaya, the Village Head of Sabon Gidan, Kakau, in Chikun Local Government Area of the state, were arrested in the operation.

According to him, investigations are still going on, with a view to arresting other members of the syndicate and others involved in the manufacture and repair of locally made guns.

He urged the public to continue to support security agents by providing them with useful information that would aid efforts to safeguard the state against terrorism and other crimes.

Speaking to newsmen, Yahaya, who was accused of harbouring some of the suspects and being in illegal possession of guns, confessed his complicity in the crime, saying that he regretted his action.

The village head said that he bought the gun from Mohammed Shuaibu for N150,000 to enable him to protect his household against the menace of armed robbers and assailants.

He said that Shuaibu told him that the gun was licensed, adding that he paid him half of the price with a pledge to pay the balance when all the gun's registration documents were given to him.

Yahaya advised the public against engaging in criminal acts or possession of arms, irrespective of the circumstances.

He stressed that people should rather report anything that could breach the peace and security of the society to security agencies.

Also speaking, Shuaibu, 45, confessed that some years ago, the police arrested him in connection with illegal possession of arms.

He said that he had jettisoned the gunrunning business for over two and a half years before Yahaya contacted him to procure a gun for him.

He said that that he usually bought guns from his tailor, Mohammed Abdullahi.

Abdullahi, 55, said that he had been in the gunrunning business for sometime; adding that he usually purchased guns from a Nigerien (now at large) for subsequent sales to his customers.

He attributed his involvement in the crime to economic hardship, saying that he had three wives, 21 children and nine children, left behind by his deceased son, to cater for. (NAN)