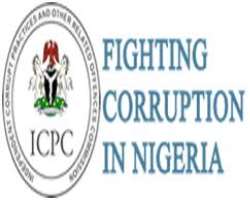 
The Independent Corrupt Practices and other Related Offences Commission (ICPC) said it received 872 petitions in 2013.

This is contained in the ICPC annual report made available to the News Agency of Nigeria (NAN) on Thursday in Abuja.

It said 434 petitions were referred for investigation while 176 of the figure had been concluded.

According to the report, the commission filed 43 cases in various courts and secured seven convictions while it lost two within the year under review.

It said 16 civil cases were won by the commission, adding that estimated property valued at N806.3 million were seized in the period.

The report stated that N469.3 million cash was recovered and remitted to the Federation Account by the commission while N503.3 million was currently in the ICPC’s recovery account.

The ICPC decried the delay in the determination of corruption cases in the country.

It said that interlocutory appeals, frivolous adjournments, assignment of designated judges to tribunals and intimidation of witnesses were responsible for such delays.