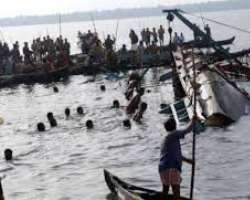 
A passenger boat capsized in River Buruku in Buruku Local Government Area of Benue State, with about 50 persons feared dead and many others still missing.

River Buruku is a tributary of the River Benue and flows along a  beach where youths picnic.

The passengers, including men and women fun-seekers, who were at Buruku Beach to mark Boxing Day.

According to reports, the incident occurred at about 8.45pm when the boat had taken aboard passengers at the crossing terminal before it capsized minutes after starting its journey.

The police public relations officer, in the state, DSP Daniel Ezeala, who confirmed the incident, said, 'The number of casualties is yet to be ascertained and investigation is in process.'

He stated that a rescue team was still searching for victims in the river.