Shake-up in the army: GOCs, Brigade Commanders, others moved 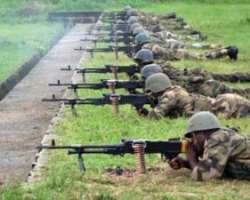 
The Nigeria Army Friday announced a massive redeployment of some of its key senior officers including General Officers Commanding (GOCs), Corps Commanders.

Two GOCs were affected in  the exercise announced in a statement by out-going army spokesman, Brigadier General Ibrahim Attahiru.  Major General John Nwaoga of the 3 Division and Major General Junaid Bindawa, 7 Division of the Nigeria Army were both redeployed..

The army authorities explained in the statement that the changes were part of the fourth quarter postings and appointments of senior officers.

Reports showed that the presidency has ordered a round-the-clock surveillance of all major installations across the country as part of security arrangements put in place to ensure a continuation of the peace enjoyed during the Christmas celebrations.

Already, the Nigerian Army has suspended all passes and annual leave of its officers and men until after the New Year festivities.

The reports indicated that the military authoritieshad directed all General Officers Commanding (GOCs) and corps commanders that all annual leave and passes be put on hold and all officers and men on leave be recalled with immediate effect.

According to the reports, the directive was part of f security measures put in place during the festive period to be fully battle-ready to combat any threat to public peace.