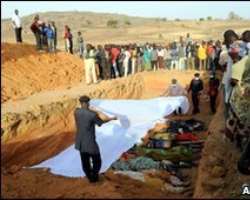 The governor of Nigeria's Plateau state has accused military commanders of ignoring warnings of an attack on Sunday near the city of Jos.

Hundreds died during attacks on three villages in the area between the mainly Christian south and Muslim north.

The massacre is seen as revenge for a previous bout of killings in January.

The army has not yet responded to the accusations but troops are patrolling the area to prevent further clashes.

There were fresh reports of gunfire in villages near Jos late on Tuesday.

Witnesses later said the troops were firing into the air to disperse crowds of youths.

Warnings ignored
Governor Jonah Jang said he had warned the army about reports of suspicious people with weapons hours before they attacked, but they failed to take action.

"Three hours or so later, I was woken by call that they have started burning the village and people were been hacked to death," he said.

"I tried to locate the commanders. I couldn't get any of them on the telephone."

The head of the northern area of Nigeria's Christian Association said he believed mercenaries were involved.

Saidu Dogo told the BBC that fighters from neighbouring Chad and Niger took part in the violence.

"For quite some time we have alerted the government to training grounds in some part of the northern state where people are being trained to cause problems in the country... Nobody did anything about it," he said.

"Many people come into Nigeria under the pretext of [being] pastoralists, they are mercenaries. They follow pastoralist routes to gain entrance, carry out their activities and then leave," he said.

Earlier, the Plateau State Christian Elders Consultative Forum complained that it had taken the army two hours to react after receiving a distress call, the AFP news agency reported.

By that time, "the attackers had finished their job and left", they said.

The authorities believe the attack on the three villages near the Plateau state capital, Jos, was an act of revenge carried out by members of the mainly Muslim Fulani community.

The US and human rights campaign groups have urged the government to arrest and try those responsible.

"The Nigerian government should ensure that the perpetrators of acts of violence are brought to justice under the rule of law, and that human rights are respected as order is restored," Secretary of State Hillary Clinton said.

'Festering wounds'
But Mr Dogo urged the international community to become more actively involved as, he said, the government was unable to protect its own people.

He also blamed local politicians for stirring up the violence.

Acting President Goodluck Jonathan has sacked the country's national security adviser, Sarki Mukhtar, in an apparent response to the killings.

But the UN High Commissioner for Human Rights, Navi Pillay, said the villages should have been properly protected after the January killings.

"Clearly, previous efforts to tackle the underlying causes have been inadequate, and in the meantime the wounds have festered and grown deeper," she said, according to the Associated Press.

Nigerian troops are patrolling the villages which were targeted on Sunday in a bid to prevent further violence and police say they have arrested more than 90 people suspected of inciting violence.

But residents of nearby communities say they are already getting ready to leave, fearing a fresh wave of violence.

"We are fleeing our village because we are afraid we might be the next target of attack by these Fulani," Patricia Silas, 30, told AFP.

"They have been making phone calls warning they are going to attack. We take these threats seriously. We don't want to be caught off-guard."

Many of the dead in the villages of Zot and Dogo-Nahawa, largely inhabited by Christian members of the Berom community, are reported to be women and children.

Clashes have broken out periodically since 2001, with competition for resources and political power seen as being at the heart of the conflicts between the rival communities.