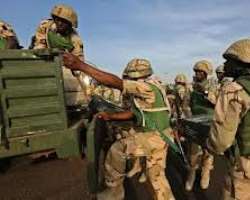 
Nigeria's defence headquarters has confirmed that at least 50 insurgents were killed and their 20 vehicles destroyed in an operation carried out on Monday night.

A statement from the Director of Defence Information, Chris Olukolade, in Abuja on Monday said the operation was carried out to track insurgents who carried out the last Friday's pre-dawn attacks on Mohammed Kur Barracks in Bama, northeastern Borno State.

It said the vehicles were the ones used during the attack on the barracks.

“The vehicles were sited through air surveillance as the terrorists were making efforts to cross the borders to Cameroun.

“Although a good number of the insurgents escaped with bullet wounds, some have been arrested.

“Over 50 of them died in the course of exchange of fire with ground troops in the ongoing operations to apprehend fleeing terrorists,” it said.

The statement added that the military lost 15 soldiers, mostly from the attack while some died during the pursuit.

“A total of five civilians also died during the attack,” it added.

The statement, however, said that intensive cordon and search operations were still ongoing to fish out the insurgents who might be lurking around communities in the area.

It noted that the families affected by the attacks have been relocated to other military locations.