Soyinka speaks on APC's visit to OBJ, says Nigeria may be heading for a shipwreck 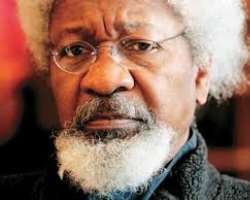 Soyinka  warned that Nigeria might be headed for a shipwreck, as top officials of the All Progressives Congress (APC) visited former president, Chief Olusegun Obasanjo, to court his support.

Soyinka in a statement entitled: 'Shipwreck ahead,'   warned that Nigeria would need urgent rescue operations if the APC wanted to invite people like Obasanjo to serve as a navigator for the ship of state.

'An APC-led group, we understand, has been paying courtesy visits to former heads of state,' he said.

Professor Soyinka said it would be disastrous for the country if the purpose of the visit was captured in the mission statement credited to the APC national leader, Senator Bola Tinubu, that the party had resolved to rescue Nigeria and appealing to Obasanjo to lead the mission.

'We're resolved and determined to rescue Nigeria. We want you as navigator,' Tinubu was quoted to have said.

Responding, Soyinka said 'If this attribution is correct, may I urge you, as an urgent public service, to advise families to begin the stockpiling of life-belts for the guaranteed crash.

The foremost writer then  said he wondered  'if General Sani Abacha would not have been on the ship's complement were he to be alive.'