I'm not engaged to Jim Iyke, I bought the ring myself - Nadia Buari 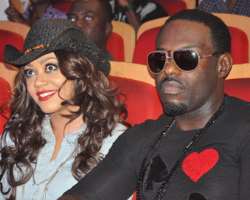 
'Nadia Buari wears what looks like an engagement ring; but I'm not engaged; I bought the ring myself', she says in reaction to media reports that she is engaged.

Since and Nollywood 'bad boy' Jim Iyke developed a certain bond, the pair have been in the news for all the love reasons.

Although they have vehemently denied any love relationship brewing between them, the Nollywood actor recently took her on a five-city European tour for her 31st birthday.

The rumours that the two are in a relationship gained currency when it was reported that Jim might have popped the all important 'Will you marry me,' question to Nadia with an engagement ring.

Reacting to the rumours in an interview with Myjoyonline.com, Nadia dispelled the rumour saying the media are always bent on making news out of nothing.

Stretching her beautiful, delicate fingers to show some rings, she said, 'When you look at these rings, I think there are three of the same kind of ring so is this an engagement ring? I think you guys want to make a story out of nothing.'

Asked the source of the rings and if they were only for fashion, Nadia said, 'Of course.'