U.S. urges Nigerians to be wary of counterfeit wew $100 notes 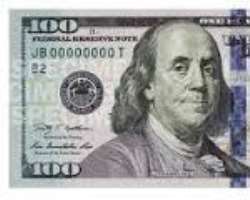 
Nigerians should always critically examine the newly introduced $100 note in any transactions to be able to differentiate differentiate the 'new authentic $100 note' from the old notes, as well as counterfeited ones, the Acting U.S. Consul-General in Lagos, Mrs Dehab Ghebreab, has said.

Ghebreab told journalists at the Launch of the new note at the office of the U.S. Consulate-General in Lagos on Thursday that they need to  be extra vigilante  especially now that they were making Christmas and New Year transactions.

She said, 'As we all know, the U.S Federal Reserve Board in October this year came up with a redesigned $100 note that incorporates new security features.

'As the new note transitions into daily transactions, Nigerian businesses and general public should watch out for its security features.

'The new security features will deter counterfeiters and help businesses and consumers tell whether a note is genuine,'' she said.

According to her, the new note has a blue 3-D security ribbon with bell images and 100s, as well as a colour-changing bell in an inkwell.

Ghebreab said that the U.S. government was embarking on a 'global public education' programme on the newly introduced and redesigned $100 note.

The Acting Consul-General said that the U.S. government had also come up with a system of retrieving the old $100 notes globally.

'Consumers worldwide are advised that it is not necessary to trade in older-design $100 notes for new ones,'' she said.

Ghebreab urged the public to swiftly report suspected cases of dealings in counterfeited notes to the Nigerian Police.