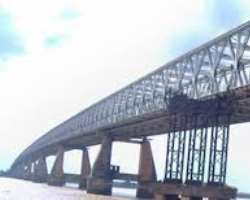 
The  President of Onitsha Chamber of Commerce, Dr Tim Anosike, has cried out about the precarious state of Niger Bridge.

According to him, the bridge might collapse sooner than envisaged by its designers and engineers.

Anosike spoke in Onitsha on Friday.
NAN quoted Anosike as saying that  that the bridge was being overburdened by the daily traffic gridlocks and had to carry tens of trucks with goods of thousands tonnage each day.

He said that the commencement of the second Niger Bridge was overdue considering the increase in vehicular movement on the bridge in the past five years.

'This chamber will never cease crying to the Federal Government until the construction of the second Niger Bridge is achieved.

'Without this project, the entire life and economic activities of the people in this part of our country are hanging on the balance as the existing bridge can collapse sooner than envisaged.

'We have thought that the critical nature of the project is not something to toy with.

'But very sadly, it has become a strategic weapon for political campaign in the hands of our politicians since time immemorial,'' he said.

The Federal Government had awarded the construction of the bridge to Julius Berger, but work is yet to start.