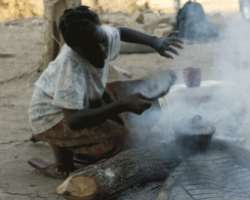 
No fewer than 98,000 Nigerian women die annually from smokes inhaled during cooking with firewoods, Mrs Bahijjahtu Abubakar, an official of the Federal Ministry of Environment, has said.

She said the death from the sector contributed to 10 per cent of global annual death, according to the World Health Organisation (WHO) study.

'The WHO says that over 98,000 Nigerian women die annually from the use of firewood.

'If a woman cooks breakfast, lunch and dinner, it is equivalent to smoking between three and 20 packets of cigarette a day.

'The death from this sector contributes to 10 per cent of global annual death and it is bigger than tuberculosis, HIV and AIDS and malaria combined, and it is only killing women.''

The coordinator said there was so much energy poverty in Nigeria, especially in the rural areas in a country that was blessed with abundant energy resources.

She said there was no way Nigeria would be contributing 10 per cent to global annual death without addressing it.

According to her, the ministry has just launched a Rural Women Energy Security (RUWES) programme to prevent the trend and to create awareness on the dangers of using dirty energy.

Abubakar said the ministry had registered over 1.6 million Nigerians under the RUWES programme.

She, however, said the ministry had been harnessing renewable energy to provide clean cooking energy for the rural women.


'Harnessing renewable energy is a tool to mitigate the impact of climate change tool, to address poverty and it is about economic empowerment and also contribution to the environment.

'So, we are looking at the lighting solution, heating and cooking solution.''

The coordinator said the ministry had been reaching out to women-based organisations through RUWES.


'We are reaching out to faith-based organisations such as the Federation of Moslem women and the Catholic Women Organisation.

'We hope through the market women organisation and all the professionals that are women- based, we are reaching out to every nook and cranny of Nigeria.''

On the affordability of the cooking stoves provided under RUWES, she said it would be a single digit interest rate for the facilities.

'The women have two years to pay back. All they need is to belong to cooperative and they are given lighting, cooking and heating solution facility to use.

'A woman can get a stove and pay over seven months and we know that the poorest woman will be able to afford it. She concluded