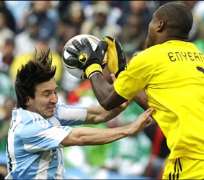 
Nigeria will again be coming up against the Argentina, home country of football avatar Lionel Messi, in the Brazil 2014 World Cup.

The Nigerian Super Eagles of Nigeria will be coming up against the  two-time world champions, Argentina as they were grouped together in Group F at the world cup mundial next summer.

At the final draw held in Costado Sauipe, Bahia, Brazil on Friday, Nigeria were placed in Group F along with Argentina, Iran and newcomers, Bosnia-Herzegovina.

Nigeria had previously been grouped together with Argentina in their three previous world cup outings, when they had to contend with football sensations from Diego Maradona to Gabriel Batistuta.

Lionel Messi was Nigeria's tormentor-in-chief at the World Cup staged in South Africa in 2010.

However, Nigeria's assistant coach, Daniel Amokachi, says he is happy to draw Argentina once again, saying Iran and Bosnia were the teams which could spring surprises.

'Argentina are world powers, so we don't need anyone to tell us anything about them but the fact that both Iran and Bosnia qualified for the World Cup with outstanding results shows that they deserve everybody's respect,'' he said.

On June 12, 2010 at Ellis Park, Johannesburg, Vincent Enyeama won the MVP Award as Nigeria lost an opening Group B match to Argentina courtesy of outstanding saves made off the feet of Argentina's Lionel Messi

'The goalkeeper was phenomenal,' Messi said after the match. 'He takes all the credit. We played a great game today and created a lot of chances. We just couldn't get the second goal.'

Enyeama said he needed to put on the performance of his life to deny Messi .

'It would be my best possible performance playing against the best possible player in the world, so it was my best,' said the keeper after claiming his MVP Award.

The game on June 25, 2014 provides a platform for both players to resume hostilities as they seek honours for their respective countries.

With good preparations, not less than three African teams are expected to come out of their groups as their pairings do not appear impossible for at least a second placement in their various groups.

Champions Spain were drawn against the team they beat in the 2010 World Cup final, the Netherlands at the official draw ceremony in Costa do Sauipe on Friday.

The European champions were also paired with Chile and Australia in Group B.

It was an equally tricky draw for England who were thrown in with South American champions Uruguay, European Championship finalists Italy and Costa Rica in Group D.

Hosts Brazil, who will kick off the competition on June 12 against Croatia, also drew Mexico and Cameroon in Group A.

BBC analysts see Ghana having the toughest task of the African sides at the 2014 World Cup after being drawn alongside Germany, USA and Portugal in Group G.

Cameroon will face hosts and five-time world champions Brazil in Group A.

Ivory Coast have been handed an easier draw than at their two previous finals in Group C, while Algeria have highly-fancied Belgium in Group H.

Cameroon
Cameroon have been to seven World Cups but lost all three of their group games in South Africa in 2010.

In Brazil next year they open their campaign against a Mexico side that needed a play-off win over New Zealand to reach the finals.

Group A
Brazil Croatia Mexico Cameroon Next up will be Croatia before they take on the hosts in their capital Brasilia on 23 June.

The Indomitable Lions have been to more World Cups than any other African nation and were the first from the continent to reach the quarter-finals in 1990.

However, that is the only time they have progressed beyond the group stages.

Ivory Coast
Ivory Coast will be happier with their draw at their third consecutive finals.

This time around they play Japan, Colombia and Greece and they will have high hopes they can progress from the group for the first time.

Group C
Colombia Greece Ivory Coast Japan In Germany, they lost to Argentina and the Netherlands before a consolation victory over Serbia and Montenegro.

The Elephants managed a draw against Portugal in 2010, but a loss to Brazil meant even a 3-0 win over North Korea was not enough for them to reach the knock-out stages.

Nigeria
According to BBC, African champions Nigeria will be pleased with their draw at their fifth finals.

They face Iran before taking on Bosnia-Hercegovina and will finish against Argentina as they attempt to reach the Last 16, as they did in both 1994 and 1998.

Group F
Argentina Bosnia Iran Nigeria They will hope to avoid falling at the first hurdle – a fate they suffered in both 2002 and 2010.

Despite losing both their opening group games in South Africa, the Super Eagles still had the chance to reach the Last 16 had they beaten South Korea in their final game but they were held to a 2-2 draw to finish bottom of the pool.

The African champions also have the advantage of having experienced the conditions in Brazil before, having taken part in the Confederations Cup earlier this year.

Ghana
Ghana are at their third straight finals and have made it past the group stages on both their previous appearances – but they face some quality opposition in Brazil.

The Black Stars will open against the USA on 16 June, before they play Germany and finish against Portugal.

Group G
Germany Portugal Ghana USA At their first ever finals in Germany 2006, Ghana lost 3-0 to Brazil in the Last 16.

In South Africa four years later, a missed penalty in the dying minutes of their quarter-final against Uruguay saw them fail to become the first ever African side to reach the last four.

Algeria
Algeria have been given a tricky group and open against a Belgium side that has a vast array of talent.

The Desert Foxes then face South Korea and Belgium as they aim to get to the knock-out stages for the first time.

Group H
Belgium Algeria Russia South Korea They should have advanced in 1982 when they became the first African nation to win two matches at a finals tournament. including a famous victory over West Germany.

However, they failed to qualify from the group on goal difference after West Germany and Austria allegedly contrived a result that allowed them both to progress.

The match became known as the “Shame of Gijon” and prompted world governing body Fifa to ensure all final group games are played simultaneously.


Complete list of groups for the 2014 Soccer World Cup in Brazil: