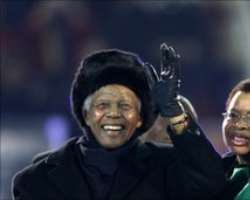 African Cultural and Fundamental Rights Council (AFCRC-USA) mourns the foremost African Freedom icon and pride of the world, Dr. Rolihlahla Nelson Madiba Tata Mandela. This is a sad day for Africa and the world, but especially the people of South Africa whose lives have become wrapped and inseparable to the inspirational reality that was Mandela. Although gone and will no longer be seen, he's here to stay because his legacies live, and his life and death is a celebration.

Mandela's life is a unique testimony of struggles for freedom, equality and other forms of social and economic justice and the optimism for victory that exists. Though, for favoring self-defense against an apartheid regime, which oppressed, destroyed and killed black South Africans with impunity (backed by mostly Western white governments and corporations such as $hell Oil), he's considered a terrorist alongside Africa National Congress (ANC) by the white apartheid and American government, which placed him and ANC on terrorist list until 2008.

Mandela unjustifiably remained on American terrorist list even after he's released from illegal prison terms he served for 27 years, visited America under the presidency of George H.W. Bush in 1990; when he became president in 1994 and out of office in 1999. The terrorist designation was dropped when President George W. Bush deemed it necessary and America became more ashamed for such callous and inglorious act against someone and organization genuinely struggling against oppressed intruders.

His reconciliatory and unity model in South Africa on release from prison in 1990 despite the white oppression against black South Africans brought to his people, Africa in general and the world a deeper sense to the power of reconciliation and forgiveness, understanding and compromise, unity and peace. Though better for the world, especially leaders/politicians to be honest and respect the rights of all, do right by the governed and act with grace, mutual understanding and justice so we don't get to the point of reconciliation, because there are things reconciliation can't change-bring back or heal. The world needs the deepest of Mandela's determination, honesty and selflessness, leadership and reconciliatory examples to forge our co-existence and creating a more better, safer and peaceful place to live.

According to him, "As I walked out of the door toward the gate that would lead to my freedom, I knew if I didn't leave my bitterness and hatred behind, I'd still be in prison." This means forgiving his white apartheid captives who oppressed and victimized him and his people. Not doing so would have kept him a prisoner whose mind wasn't free hence holding himself captive, though freed from actual prison he'd reasoned. Mandela's thinking and conviction speaks to today's actors.

Such thinking isn't only to those who have been or are currently oppressed by a cabal of politicians and rulers in most African countries, for example, and other parts of the world. It's also to those who have oppressed, victimized and continue to holding opponents and those who disagree with them on principle (thus criticize their leadership styles) hostage and locking some up in prison instead of opening up their mind and thinking differently to amicably and justly resolving outstanding issues.

There is need for forgiveness and reconciliation after misunderstanding or disagreements and in some cases, South African situation, outright oppression, power exhibition due to its intoxication and greed. It pays to reach such conclusion than not to do so, Mandela admonished South Africans, the continent of Africa and the world. But his struggles and lessons from them also show that the earlier governments/oppressors (groups and institutions) stop their unwarranted acts-gross dishonesty and cheating, corruption, mismanagement, injustice, discriminatory and blood politics and starts respecting every human being the earlier and easier peace will come.

Mandela, like many distinctive leaders brought the lesson that treating all with respect and as equals, fairly and with justice ringing in the air is common sense and veritable to peace, development and stability. His struggle shows that, we will not get to the point where needed peace would be threatened, if greed, illegal invasion and annexation or colonization (oppression) and other forms of vices institutionalized and protected by the governments of the world and have currently become the treat of most African governments are buried from people's heart.

Now that Mandela's voice is no more-gone at 95, the world, especially South Africa and the continent of Africa, which is far behind in today's proper democracy and good governance, development and global science, technology competition will live to grapple the idealism and reality of his dreams and mission. They'll most of all have to work harder to practice his beliefs and teachings else the continent shall descend into deeper calamity worse than the present fundamental rights abuse, corruption and zero accountability regime that pervades the land.

Meanwhile, according to reports, Mandela was born on July 18, 1918. His father died when he's a little boy. He started on a rough slate, yet taken in by the fine-hearted of the community and sent to school. As a young man with an activist mind for change and better life he helped to develop and form the youth wing of ANC. As a student activist in about 1940, he's expired from Fort Hare, South Africa's first University for blacks, for taking part in anti-apartheid protest with Oliver Tambo. He's also a lawyer who mobilized the Black South African people against apartheid regime in a Stay-Away protest or strike in 1961 at the age of 42.

In 1950s and early 1960s, Mandela was deeply involved with ANC and leading the youth wing of the organization, and navigated through apartheid with the knowledge that Africans needed political independence and ended up in jail for 27 odd years. He became the first black president of the nation in 1994, when apartheid ended, having been released from prison in 1990. This is a dream and mission accomplished for Mandela and today, it's a dream and mission accomplished for the world!

His actions, dogged-headedness and even stubbornness standing for freedom, respect for all humans and the protection of fundamental rights, while denying himself every good thing isn't lost on the world, especially the youths. It must thus not be lost on politicians, leaders and emerging leaders of the world.

On assuming power in 1994, Mandela lived to the test of a response he gave in 1961 when interviewed from his hideout, having mobilized a massive Stay-Away protest/strike as part of a non-cooperating action plan to force the hands of the government to respect black South African rights to political independence and voting franchise or right on the basis of one-man-one vote. In that interview, he said, "We've made it very clear in our policies that South Africa is a country of many races...there is room for all the races in South Africa."

His reconciliatory move and the reality it became proved the above statement and legacies worth emulation by all of us and the politicians, leaders in particular. Although Africa and the world, especially South Africans will miss the person, spirit and leadership of Mandela which rolled in sincerity and commitment, honesty to stand up aganist injustice. His stance and struggles for freedom, Will and determination to face and defeat the odds of times, spirit of forgiveness, love and commitment to poverty eradication, HIV and AIDS, other great causes he championed and those he supported are models on which the world, particularly African states should rebirth and domesticate.

AFCRC seize this opportunity to call on the world's governments, especially those of the African continent to take seriously the issues of human and indigenous peoples rights. They'd project and protect fundamental rights to education, socio-economic freedom and equality as a way to empowering the citizens and checking acute poverty and diseases. They'd likewise promote and protect rights to political self-determination, unity, security and peace as a way to honoring, promoting and protecting the legacies of Mandela .

While AFCRC wishes the repose of the spirit and soul of Holihlahla Nelson Madiba Tata Mandela, we wish also that South Africans, African nations and the world, but particularly his family shall be given the fortitude to bear this loss that is irreparable. Mandela, thank you very much for your life, work, sacrifices and being such an inspiration to the world!