Governor Orji Mourns Mandela's Exit At 95, Describes Him As Icon Of African Democracy 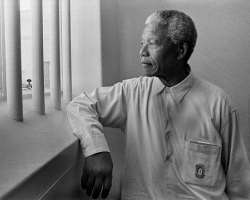 Abia State Governor, Chief Theodore Orji, has described the death of former President of South Africa, Dr. Nelson Mandela, as a big loss to the African continent and international community.

In a press statement by his Chief Press Secretary, Mr. Charles Ajunwa, Governor Orji who expressed sadness over Mandela's demise at the age of 95, said the late freedom fighter popularly called Madiba by his admirers all over the world until his death remained a revered leader par excellence and an icon of African democracy.

According to him, Madela's struggle against apartheid rule in South Africa which landed him in prison for 27 years and his eventual freedom before he become the first South African black in 1994, portrayed him as a fearless leader who fought injustice to a standstill.

"Dr. Nelson Mandela was a great leader. And he was an epitome of peace, justice, humility whose positive disposition to governance especially in African continent brought dignity and respect to Blacks all over the world. Indeed, the world has lost an icon of democracy. He lived a fulfilled life worthy of emulation by all and sundry."

Meanwhile, Governor Orji has expressed shock over the deaths of school children who lost their lives when a truck driver lost control and rammed into a classroom at Ogbor Hill, Aba.

The Governor who described the sudden deaths of the children as unfortunate, equally consoled their parents to take heart and not to lose hope. He prayed that the souls of the departed rest in peace.