Between Uche Ezechukwu And Joe Igbokwe By Valentine 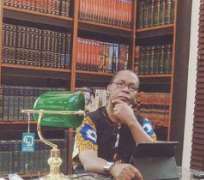 I read the exchange between these two illustrious sons of Anambra State.

1. Ngige's dismal performance was caused by his being in the wrong party

2. No way for APC in Anambra and that the votes Ngige even got was due to his personal standing (I dare add, among those that do not actually understand the man, and there are many of them)

3. Need to fight for one's own people even at the risk of being branded an ethnic jingoist

1. It is clannishness and political timidity to fight for one's own people

2. The last election was rigged and would be nullified by the Tribunal

3. Uncle Joe said other unprintable things about Uncle Uche in words APC people are noted for

1. The last election was conducted amidst tight security that prevented rigging. When Ngige could not rig in Idemili North, he knew the game was up and started shouting and rolling on the ground.

2. Uncle Uche was right that we must first and foremost fight for the preservation of our own kind, for, self-preservation, as often said, is the first law of nature/survival

3. If Anambra were to be Osun or Ekitti or any of the Yoruba states, any of their own Ngige standing election in any other party that is not theirs will not get up to 500 votes, but here in Anambra, he got almost 100,000. They are more clannish and ethnocentric than we are. Is Joe Igbokwe claiming not to know this?

4. Does APC have Salami to procure judgement for them? Why then does Uncle Joe think APC will win at the Tribunal?

5. If this election is held 20 times, there is no way Ngige will win, so let us not deceive ourselves.

6. Igbo people need more Ezechukwus, those that are unabashedly Igbos and are ready to defend that without apologies.

Your own reaction is welcome.