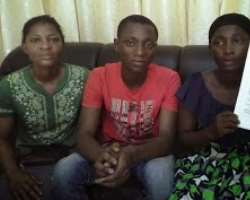 It's no longer news that the 'Go and Die' widow who dined with the governor of Edo State, Adams Oshiomole last Monday and also received the sum of two million naira, a public apology and scholarship for her son has now been appointed as Special Assistant on Environmental Matters to the Governor of Edo State. Her 'Go and Die' status suddenly changed to 'Come and Dine'WATCH THE VIDEO HERE

She flaunted her appointment letter for all to see, blessing in disguise you would say...Meanwhile some say the Governor is over exaggerating the whole thing now and making it look like it's ok to break the law.

Well, learnt PDP, the opposition party in the state also forwarded the sum of N250, 000 to support the woman too but she declined saying that the party can use that to support other widows…