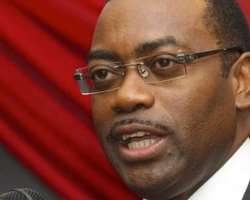 
President Goodluck Jonathan's agricultural policy has received a huge endorsement with the emergence of the Agriculture Minister Akinwumi Adesina, the man who spearheads it, as Forbes African of the Year.

Forbes said thae award was for his  reforms to the country's farming sector.

'He is a man on a mission to help Africa feed itself,' said Forbes Africa editor Chris Bishop.

Analysts say Nigeria's economy has long been dominated by oil, while agriculture has been ignored, even though it supports far more people.

'My goal is to make as many millionaires, maybe even billionaires, from agriculture as possible,' he said in his acceptance speech.

Aliyu Tanko from BBC Hausa says Mr Adesina has introduced more transparency into the supply and distribution of fertiliser, which had previously been marred by massive corruption.

In January, Mr Adesina announced a scheme to hand out 10 million mobile phones to farmers to 'drive an agriculture revolution' so they can find out the latest market information.

The phones are also used to get vouchers for seeds and fertiliser.

However, our correspondent says this goal has not yet been achieved, noting there is no mobile network coverage in many rural areas.

The main opposition party criticised the scheme as a 'mischievous vote-catching exercise'.

Mr Adesina was chosen ahead of some of Africa's most prominent businesspeople: Aliko Dangote and Jim Ovia, also from Nigeria; South Africa's Patrice Motsepe; and Zimbabwe's Strive Masiyiwa.

Although their country is one of the world's biggest oil exporters, most Nigerians live in poverty, especially in rural areas.

Mr Bishop said he hoped the award would 'encourage the rest of the continent to grow more of its own food'.