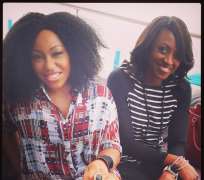 The ancient city of Calabar, Cross River State will be lightened this Saturday when some Nollywood stars led by Rita Dominic and Kate Henshaw light up the Africa's tallest Xmas tree. The event will open the annual one month-long Calabar Festival, which has become a world class event. The Calabar Carnival attracts tourists from all over the world who throng the city for the occasion.

The Christmas tree-lighting ceremony is definitely going to be an epic event. The Festival will be witnessed and declared open by the state Governor, Senator Liyel Imoke at the Calabar Municipality Council grounds. But the Saturday's event holds at the Millennium Park in Calabar.

Other stars confirmed to grace the event are Gideon Okeke and Ihuoma Nwigwe. Top comedian, Akpororo is also billed to crack the ribs of guests.
The tree-lighting ceremony will be followed by the Paradise City Walk against HIV/AIDS the next day, while the likes of Samsong, Obiwon, Segun Obe, Kage, Nnanke and Darlene, who will be performing at the Millennium Park by 7pm, are billed for the post-walk event tagged 'World Aids Day Charity Concert'.

The Festival Village, according to a source in the Government House, is being moved from its traditional ground at the Cultural Centre, owing to the on-going construction work on new shopping complex there.

Reports say the tourist city is already wearing new looks, in readiness for the groundbreaking events.