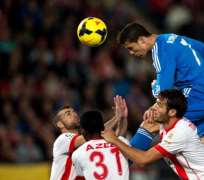 
The Portugal star was forced off in the second half of his side’s clash with Almeria with a thigh problem, although early reports suggest it is a minor knock

Real Madrid have been forced to withdraw Cristiano Ronaldo during their Liga encounter with Almeria after the Portugal star picked up an injury in the early stages of the second half.

The 28-year-old appeared to pull up in discomfort after he burst down the left wing before stretching to fire in a cross with his left foot.

The Portugal captain then signalled to the bench he wished to be withdrawn due to a problem with his left thigh, with Jese Rodriguez replacing him.

Ronaldo had put his side 1-0 up in the first half prior to being forced off with the knock.

Early reports suggest the injury is not serious, with Ronaldo able to walk from the pitch and down the touchline without assistance.

“It was just a precaution, It’s nothing special. I got kicked in the first half and the muscle felt a bit sore,” the attacker reassured to Carrusel Deportivo after the match.

Noting as much, los Blancos coach Carlo Ancelotti played down the severity of his star’s injury: “He had a problem with his ischium. I don’t think it’s a big problem. It doesn’t hurt him.

“Cristiano started the game with a goal but then he had a little problem. His muscle is a bit tired but I think he’ll be better soon. Tomorrow he’ll have some tests but we don’t think it’s an important problem.”

The former Manchester United man joins fellow Ballon d’Or favourites Lionel Messi and Franck Ribery on the treatment table, with Messi likely to be out until the new year with a hamstring problem while Ribery suffered a minor fracture to a rib while on international duty with France.