Kate Henshaw; An Intimidating Beauty At 42 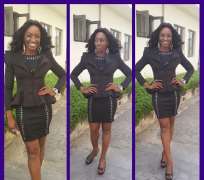 At 42, highly celebrated movie star, Kate Henshaw is not showing any sign of aging. The Calabar, Cross Rivers State-born screen diva still competes with teenagers when it comes to beauty. She is one that can still be described as sweet 16 at over 40.

The single mother of one, though with a crashed marriage, always looks radiant from inside, which might be the secret of her youthful look.

Little wonder some up and coming actresses are envious of her beauty as she gives them a run for their money. Apart from her intimidating beauty, Kate read Medical Microbiology at the School of Medical Lab Science, Lagos University Teaching Hospital, LUTH.

She is a judge of popular talent hunt programme; 'Nigeria's Got Talent Show' and a brand ambassador for 'Onga Food Seasoning.' Kate started acting in 1993 when she featured in 'the movie 'When the Sun Sets', where she played the lead role. She won an award of the African Movie Academy Award (AMAA) as Best Actress in a Leading Role for the film 'Stronger than Pain' in 2008. No doubt, Kate is a combination of beauty and brain.