Fashola bars commissioners from use of siren 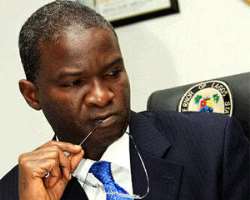 
Lagos State Governor, Mr. Babatunde Fashola (SAN), has barred his ccommissioners from the use of sirens.

He said that members of the State Executive Council (SEC) caught using  sirens within the state would lose his job.

Fashola handed down the order while addressing stakeholders in the transport sector including the Minister for Transport, Senator Idris Umar  at the opening ceremony of the 13th National Council on Transport held at Civic Centre, Victoria Island.

The governor called for concerted actions against the arbitrary use of siren and horns in the country, lamenting health and other social implications resulting from the use of loud horns and sirens.

He said, 'We use loud horn especially the one used during emergency. Are we in a state of perpetual emergency? If those who manage the public transport policy can get away by using sirens, it will never work,' he said.

He said he had never used sirens since he was elected into public office in 2007, saying 'from the day I became the Governor of Lagos State and until this moment, I have not had course to use it. I do not intend to use it. I detest noise.

According to him, 'But I think it is even worse because people elect us to manage public transport on their behalf. We choose to escape from it. After riding in a free car paid for coupled with the free fuel, it is an abdication of duty. It must apply it across the board.

'At least, at the state level, I can speak. My commissioners have a very clear order; they will lose their job if they do. Every form of unqualified person passes through our security post in a siren. We expect to be safe and secure.

'Those we put there to protect us cannot even detect who is who. So, when they approach a check point with a kidnapped victim in their boot, they just put on their siren and drive away. These are things that we must really reflect about and take very hard decisions about which way we want to go,' the governor explained. He also faulted the rights of NIWA, an agency of the federal government, to regulate and oversee the development of the municipal water transportation within the state, explaining that if the states 'have the capacity to operate and manage their municipal road transport system, they must retain a similar capacity to manage water transportation services, as far as it is transportation within the territory of the state.'

The governor at the occasion faulted the power of the National Inland Waterway Authority (NIWA) to regulate the water transport services within the jurisdiction and territory of a state.

He said it was unacceptable for NIWA to require the state government 'to take a permit from it before I set up a jetty in my own lagoon. We will not stand for that. I find it objectionable where NIWA suggests to me that before we can build the Lekki-Ikoyi link bridge over a lagoon inside our state, I should come and take a permit to build bridge for the state residents. We will not apply for such permit. These are some of the issues we face. I must say are very important under in implementing some government policies.

'But the parastatals can also be the cog in the wheel of progress when enough attention is not paid to their activities. I think it is not the policy of the national government that state cannot run their own internal water services.'

Also speaking at the council meeting, the minister explained that the federal government had rolled out a comprehensive programme to rehabilitate existing railways across the federation.

The minister said consequent upon the completion of rehabilitation work on the Lagos-Kano narrow gauge, passenger/cargo operations commenced in December 2012, while container movement from Apapa Port complex to Kaduna and Kano commenced in August.

He said works 'are ongoing to complete the rehabilitation of the Eastern Narrow Gauge Line, Port Harcourt-Aba-Umuahia-Enugu-Makurdi-Lafia-Kuru-Bauchi-Gombe-Ashaka-Maiduguri with lines at Kuru to Jos, Kafachan and Kaduna.