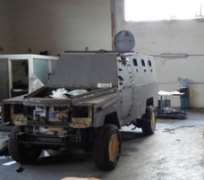 
As interest in armoured luxury cars rises among the upper class, some Nigerian auto firms have intensified research work on the armouring technology.

Proforce said it had sealed a pact with Defence Industries Corporation and some para-military organisations for the production..

The Managing Director, Proforce, Mr. Ade Ogundeyin, said in a statement obtained on Friday that his firm was currently working with the Defence Industries on the APCs, just as he stressed it was equipped to armour other categories of vehicles.

He criticised the idea of importing armoured vehicles, saying it did not make economic sense for Nigerians to continue to import what was available locally.

'There is no need for government or anybody to import bulletproof or armoured vehicles. It is a waste of resources.

'Why import at very high cost when there is capacity to produce better vehicles at comparatively lower prices locally? This is an issue I hope the new auto policy will address.'

Ogundeyin said the armouring materials were resistant to AK-47 gunshots and assaults with improvised explosive devices, stressing that the vehicles would run on special flat tyres that could endure several kilometres of journey even when deflated.

The Proforce boss also expressed support for the recently developed auto plan, describing it as one of the best policies of the President Goodluck Jonathan administration.

He said if fully implemented, the document was capable of boosting industrial activities in the sector and contributing towards the achievement of government's targets for the economy by 2020.

He aligned with the thrusts of the new auto policy, which were to encourage investment, enhance technological development and revive production activities in the industry.

Ogundeyin said, 'This is a laudable plan which is capable of transforming the local industry. The impact will be felt in many ways, including the establishment of many small- and medium-scale support industries, job creation and increase in capacity utilisation.

'But a lot will depend on whether government has the will to fully implement the policy, especially the area that concerns their agencies or departments buying locally made vehicles. Another critical area that requires firm action on the side of government is the one that introduces stiffer tariff structure for fully built imported vehicles.'