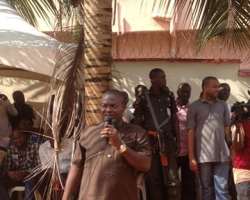 The Director of Tony Nwoye Campaign Organisation Hon Osita Ezenwa who declared the Forum open was impressed with the large number of Stakeholders that came to give their support to the party even on short notice. Prince Arthur Eze who represented President Goodluck Jonathan gave assurances that the National Leadership of the PDP are solidly behind Comrade Tony Nwoye while also assuring that President Goodluck Jonathan will arrive the state in no distant time to join the PDP and stakeholders in Anambra State to support Comrade Tony Nwoye

The Deputy Governorship Candidate Dr Amanchukwu Ezeike who spoke after a short while charged the people of the state and party faithfuls to work together in a synergic harmony to ensure absolute victory for the party on the 16th of November. He also reminded the people of the state the need to send the APGA Government packing from Government House more especially on the inability of APGA and their leaders to organise Local Government Election in the state since the past seven years which has impoverised Local Gvernment Areas, killed democracy and enthroned autocracy in the state

Comrade Tony nwoye received a standing ovation when he took the floor to address the stakeholders. Comrade Nwoye started by thanking the PDP and the people of Anambra state for the confidence and support he receved during and after the guber primary. He delivered a solidarity message from the National Chairman Dr Bamanga Tukur while also assuring that the Presidency is favourably disposed to a free and fair election devoid of rancour in the state. While making his speech, comrade Nwoye advised the people of the state to be more pro-active, honest, hardworking and dedicated to the Anambra dream as these are the ingredients that will usher hope and true democracy in the state. Comrade Nwoye promised that if voted- in, his Government must organise Local Government Election in the state between three to six months of his swearing-in as Governor to ensure that the Monthly allocations for each Local Government Areas goes straight to the grass-roots. He accused the APGA led state Government of being autocratic and insensitive to the yearnings of the grass-root and mismanagement of Billions of Naira meant for the Local Government Areas which the state tactically diverted for seven and half years

Comrade Nwoye further posited that the present Government in the state encouraged insecurity and kidnapping as a result of it's inability to create jobs for the teeming Anambra youths and graduates since the past seven years of Mr Peters Obi's administration, an act that created a chain reaction that saw a prolific rise in crime rate in the state. Comrade Nwoye assured that his government will use Job creation to fight crime, insecurity and kidnapping in the state. In his words ''I am a youth and I know exactly what the youths want. I will keep the youths busy and engaged by creating jobs and other policies that will get our youths engaged and also give them a sense of belonging. By so doing, crime rate and kidnapping will reduce as our youths will be too busy to think of social vices''

Comrade Tony Nwoye continued by promising to remember the poor and the widows in Anambra state, that he is touched especially when he sees the hardship the indigents, widows and Orphans pass through in the state and promised that his government will create a social fund that will cater especially for the widows and the orphans. He also promised to ensure the creation of soft loans for Anambrarians that would want to access such loans to further their businesses interests and make a living. He frowned at the poor state of hospitals in the state which have became DEATH TRAPS while APGA'S Government neglected its updating. He assured that his government will give healthcare a priority and must update all existing infrastructures to ensure the functionality of Hospitals, Health centres and Medical institutions scattered across the state especially the health posts in the rural areas to ensure Health Equality and Equity in the distribution of Healthcare resources so that every son or daughter of the state can access quality healthcare wherever he or she lives He concluded by thanking members of the stakeholders forum and also promised to do his best to ensure that the state works again in 2014 if elected