Success May Return For Semi-Final 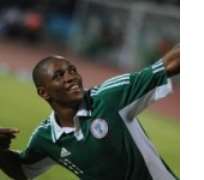 the semi-finals of the U-17 World Cup if Nigeria makes it that far.

The forward limped out after Nigeria's second game of the tournament with a hamstring injury and has not featured since.

But Coach Manu Garba says the striker is making good progress and is in line for a return.

'Success is making good progress and he could be among the selection for the semi-final if we qualify,' Manu told SportingLife.

'He is a nice player with lots of enthusiasm for the game.

'I will be willing to play him if he is 75 percent fit.

'He was our highest goalscorer during the CAF Under-17 Championships and we've missed him so much.'