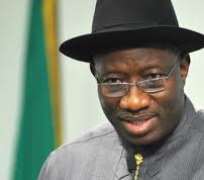 
President Goodluck Jonathan has indicated that he will present 2014 budget to National Assembly on November 12.

This contained in a letter to the House of Representatives on Tuesday seeking to present the estimates of the 2014 budget to a Joint Session of the National Assembly.

In the letter read by the Deputy Speaker, Mr. Emeka Ihedioha, the President sought to be allowed to present the estimates on November 12.

Part of the letter read, 'I write to crave your kind indulgence to grant me the slot of 12:00 noon on Tuesday, November 12, 2013 to enable me to formally address a Joint Session of the National Assembly on the 2014 Budget.

'While thanking the Honourable Members of the House of Representatives of the Federal Republic of Nigeria for the constancy of their support, please accept, Rt. Hon Speaker, the assurances of my highest consideration.'

However, Ihedioha, who presided over Tuesday's sitting, also read the riots act to standing committees of the House over their slow pace of work.

He directed them to submit their oversight reports on the 2013 budget to the House on Thursday.

The House had adjourned twice since September to give the committees enough time to conclude their oversight visits to ministries, departments and agencies of the Federal Government.

Lawmakers had said that they would use the reports of the oversight as a guide in considering the 2014 budget.

Members only reconvened on October 22.
But, on Tuesday, Ihedioha disclosed that only 10 out of over 90 standing committees had submitted the reports of their findings on budget performance.

He warned that the leadership would be forced to name any committee that failed to produce its report by Thursday.

In a related matter, a member from Edo State, Mr. Rasaq Bello-Osagie, complained that the House was being portrayed in bad light by committees that failed to execute assignments referred to them.