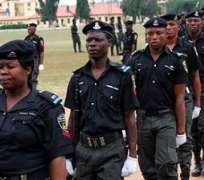 
The FCT High Court on Thursday heard that an accused, Veronica Onyegbula, allegedly cashed 303 cheques in the name of the Director, Police Pension Office.

A witness, Julius Adebulu, an Internal Auditor at the Police Pension Office, told Justice Husseini Baba-Yusuf, that the cheques were drawn in the name of Uzoma Attang and Ms. Onyegbula.

They took their pleas on an amended 20-count charge that borders on criminal breach of trust, which contravened Section 315 of the Penal Code.

Led in evidence by Rotimi Jacobs, the Counsel to EFCC, Mr. Adebulu alleged that the cheques were drawn in the range of 500,000 to 4.9 million.

He told the court that before September 2009, the Police Pension Office made payments in forms of cheques and cash in the names of retirees who provided Letters of Identification.

After listening to the testimony, Mr. Baba-Yusuf adjourned the case to October 25 for continuation of hearing.