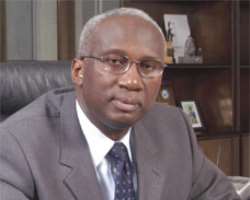 By STEVE AGBOTA
Thursday, March 04, 2010
Ndukwe
In the last decade, Nigeria has achieved tremendous growth in the telecom industry and there is the need to sustain this pace of growth and development into the future. Obviously, Information and Communications Technology (ICT) is driving the new global economy.  Socio-economic development and sustenance of any modern nation is dependent on the adequacy of the nation's telecommunications and information technology infrastructure.

The Executive Vice-Chairman (EVC), Nigerian Communications Commission (NCC), Dr. Ernest Ndukwe, who was the Guest Lecturer at the 2010 Exemplary Leadership Lecture organized by the Leadership Role Model Foundation of Nigeria (LRMF) in Lagos, said that the telecomm sector has attracted $18 billion which is about N2, 714,5 trillion, both in direct local and foreign investments since 2001 when the liberalisation took off.

Ndukwe said that the usage of ICT resources in the country has been boosted by the quantum leap in the telecommunications sector in the past eight years, in which subscriptions to telephone services have risen to the current level of over 74 million active connected lines.

He also explained some critical factors on development and how to sustain the Nigerian telecommunications sector, adding that Nigeria has leapfrogged into the circle of the world's information-rich economies and is the eighth largest telecom market in the world.

Nigerian telecoms industry today
The Nigerian telecommunications industry is very different from what it was just a decade ago. The nation over the period from 2000 to date has recorded massive nationwide deployment of telecommunications infrastructure, availability of a wide choice of communications services, growth in the teledensity figures from 0.4% in December 2000 to 53% by the end of 2009. The nation has also gained from improved technological know-how and expertise of the Nigerian workforce. Increased competition in the market has also resulted in cheaper and more affordable services for the consumers.  Today, to get connected to a mobile service is virtually free.

The sector is a major employer of labour with tens of thousands of Nigerians directly employed by the telecom companies, and several millions of others also benefiting from indirect employment as result of the telecom boom.   Some of those beneficiaries of the growth in the sector include contractors to equipment suppliers, construction firms, research companies, advert agencies, media consultants, etc. In the financial sector, enterprising banks have designed innovative products that leverage the use of mobile phones.

The emergence of the large number of telecommunications companies has also led to the return of significant number of Nigerians from the Diaspora. These professionals, with the requisite international experience have been attracted back home and form an invaluable addition to the industry's growing pool of skilled human capital.

Nigeria has leapfrogged into the circle of the world's information-rich economies and is the eighth largest telecom market in the world.

As the nation's Regulatory authority, the NCC has been working assiduously to see that universal access is attained so that all Nigerians, not just those in major cities and urban areas, enjoy the full benefits of the Information age with the attendant positive socio-economic gains.  The Commission in line with its vision and in the fulfillment of its mandate is committed to the attainment of a robust, efficient, ubiquitous and high quality national network that will provide modern, affordable, widely available ICT services to the citizens of Nigeria.

Before the licensing of the Digital Mobile Operators in 2001, private investments in the telecommunications sector in Nigeria stood at about $50 million.  Between 2001 and now, the sector has attracted about $18 billion in direct local and foreign investment. These high investment levels have been attained because Nigeria has become one of the most desired investment destinations for ICT in Africa not just due to the potential of the market but also due to the stable policy and regulatory regime.

The role of the policy maker must of necessity be separate from that of the regulator.

The situation where the policy maker tries regulating the industry when there is a regulatory body in place would run contrary to international best practice and creates regulatory uncertainty which investors do not like. Maintaining a stable and predictable operating environment is essential for attracting investment and avoiding actions that can constitute a disincentive for investment or challenge the sustainability of returns on investment capital. The telecoms sector is very capital intensive and therefore, to continue network expansion, improve quality of service and increase coverage in Nigeria, emphasis must be on ensuring an attractive operating environment.

Maintaining the independence of the regulatory institution, operational, financial The regulator, in an open liberalized market draws its relevance from the widely accepted role of the state as a motivator and impartial umpire. This role is typically very demanding and encompasses far-reaching and multi-disciplinary issues. To be successful, the function should be based upon a well-defined set of objectives.

These objectives must cover virtually every aspect of telecommunications network and service provision including tariff, technical standards, allocation of scarce resources, fair competition, and the regulation and mediation of inter-operator issues such as interconnectivity and interconnect termination rates.  Indeed, a good regulatory environment can contribute to attracting investment by providing stable, transparent and non-discriminatory access to telecommunications resources.

For sectoral liberalization to achieve the desired goal of Government and to meet the needs of the populace, the regulatory oversight function must be carried out through a truly independent regulator, properly empowered to effectively carry out its assignment. Experience has shown that the independence of the Regulatory body is essential to the successful performance of its role in the sector.

Regulators need to be isolated from political or administrative pressures to be able to regulate the market fairly and earn the confidence of investors, consumers and stakeholders. Also, without adequate funding a Regulatory body will not be effective.  In an environment characterized by operators with deep pockets, the Regulator must be operationally and financially independent of network operators and service providers and must never depend on such entities for favors or handouts.

Efficient management of national resources
A key role of the regulatory body is to see to the optimal use and equitable allocation of scarce resources such as the frequency spectrum, numbers and rights of way. To sustain the gains of the revolution, spectrum policy must include timely sale of available frequencies to support new technologies.

In the very near future, some frequencies will be freed up as a result of the impending digital switchover from analogue to digital television, commonly referred to as digital dividend spectrum. Because of the favorable propagation characteristics of this band, I will recommend that a good proportion of this band be reserved for mobile broadband.

Nigeria will benefit tremendously from this because the future broadband growth and development in Nigeria depends on wireless platform. Regarding numbering resources, the NCC is currently working on a new national numbering plan for the country as well as finalizing guidelines for Value Added Services using Common and premium short code numbers. These are necessary for next wave of development in the area of Value Added Services in the country.