Okonjo-Iweala: Why Recovery Of €185m Abacha Loot Is Delayed 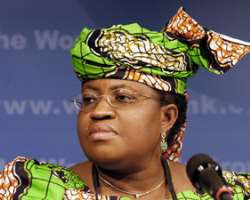 The federal government has thrown more light on the challenges it is facing in the recovery of the €185 million stashed away by the late Head of State, General Sani Abacha, in banks in Liechtenstein, one of the smallest countries in the world, located in central Europe.

The Coordinating Minister for the Economy and Minister of Finance, Dr. Ngozi Okonjo-Iweala, told journalists in Washington DC, United States that the government of Liechtenstein was not disposed to returning the loot to the Nigerian government.

She said the German-speaking country, through shell companies, commonly called front companies, had put up legal challenges, in a bid to ensure that its banks benefited from the proceeds of the loot.

The finance minister said: 'When we identified this money 14 years ago, we set up a series of steps to try and get it back. It was going through several courts.

'The companies and their representatives have always thrown legal challenges every step of the way. It got to a stage where the court in Liechtenstein had litigated that the money should be returned.

'However, those companies have taken the case to the European Court of Human Rights, saying that the Liechtenstein Government had violated their human rights by allowing this money to be taken away from them.

'As you know, that charge does not obtain but by taking it to that court, that means another two or three years delay. They are just using delay tactics. The delay tactics suits the Government of Liechtenstein because their banks get to keep the money. And what do they do? They will invest it and make money out of it.'

She disclosed that the federal government had taken several legal steps, through its lawyer, Mr. Enrico Monfrini, a Swiss national, and the Attorney-General of the Federation, Mohammed Adoke.

But the efforts, according to her, had always been met with stiff opposition from the Liechtenstein Government, which is now asking for a third-party guarantee from the Nigerian Government.

This, she pointed out, was after she had signed an indemnity on behalf of Nigeria, that the federal government would pay a fine if the European Human Rights Court - where the shell companies fighting against the release of the loot, filed a case - found any reason to penalise the country for releasing the funds.

'If this thing keeps being delayed, it will be denying Nigeria its rightful possession and the Liechtenstein Government asked us to sign a guarantee that if the European Court of Human Rights fined them for any reason, we will indemnify them; that means we will pay that fine.

'We said fine, because the likelihood of paying for acting in this way was very limited. So we signed the indemnity, I signed it with the approval of Mr. President and after receiving it, they now turned and said no. They need a third-party guarantee; they need a bank in another country to guarantee them,' she explained.

According to her, the delay tactics by Liechtenstein was aimed at ensuring the proceeds accruing from the loot are enjoyed by the banks, to the benefit of the economy of Liechtenstein but to the detriment of Nigeria, the rightful owner of the stolen money.

Okonjo-Iweala argued that requesting Nigeria for a third-party guarantee was unacceptable, stating that the federal government would fight hard to recover the money, which is rightfully owned by the country.

Speaking further, Okonjo-Iweala stated: 'We said to them if they have a problem with how the money will be used, we will do a similar thing with them, the way we did when the Swiss Government returned $500 million equivalent to us under President Obasanjo's regime.

'We had the World Bank work with us with our own NGOs and Swiss NGOs to monitor the use of this money. We put the money to specific projects that were beneficial to Nigerians, in rural areas, like rural roads, health clinics and all of them were specified and monitored.

'And today, that has set the track record for the way these returned monies can be used. We have said to the Liechtenstein Government that we are prepared to do a similar thing and the World Bank has agreed to participate in it.

'There is a unit at the World Bank, which I set up during my time called, The Stolen Asset Recovery Unit, and they do these kind of things with countries.

'They can help you monitor the use of returned assets, they can help support you in recovering your money. We are glad to have the World Bank, so they should return our money and it would be used in a very transparent way for projects that Nigerians will be happy about.

'President Goodluck Ebele Jonathan has pledged himself in this respect, and that's what we are asking them.'

Nigeria had embarked on a vigorous campaign over a decade ago for the return of the €185 million looted by firms linked to Abacha but harboured in Liechtenstein.

In 2000, the federal government made a formal request to Liechtenstein for the return of the looted funds channelled into the tiny country through shell companies linked to the former maximum ruler.

Criminal investigations and subsequent forfeiture proceedings had established that the funds originated from bribes paid by Germany's Ferrostaal AG to companies linked to General Abacha, with the looted funds said to be connected to a grossly inflated contract for the construction of an aluminium smelter.

About $2.4 billion of these stolen assets, a chunk of which was laundered through European banks had been traced. So far, Nigeria has recovered $1.3 billion, with the largest tranche of $500 million coming from Switzerland in 2005.

An additional $1.1 billion, traced and harboured in France, United Kingdom, Luxembourg and the Channel Island of Jersey, is still trapped in legal action.