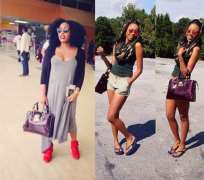 For those people who are identified with the designer label, Louis Vuitton, it's simply LV.

The two African actresses are really telling the world that what their foreign counterparts can do, they can as well do the same.

Yvonne rocked the expensive bag on 1st of October having a fun day in New York while Rita was spotted today a day after Nigeria's Independence day rocking the same bag.

Tongues are wagging where our movie stars get the money to display such wealth from.

Remember the last time that Genevieve Nnaji and Ini Edo rocked a Chanel Lego Clutch which sells for $10,000, though, the Ini Edo's Channel has been discovered to be an the one made in China, however, it still bothers some stake holders in the industry where they get the money despite the fact that piracy is deeply feeding on their sweat.