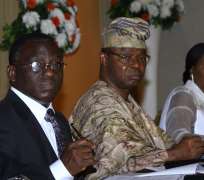 Lagos (Nigeria) September 24, 2013 - Honeywell Flour Mills Plc has recorded a profit after tax of N2.844bn for the full year ended March 31, 2013. This represents an increase of six per cent over the N2.7bn recorded in the similar period of 2012. Also, the company's turnover stood at about N46bn representing an increase of about N8bn or 20 per cent compared to about N38bn recorded in March 2012.

Consequently, the N1.3 billion total dividend earlier declared by the company was approved by the shareholders during its 4th Annual General Meeting in Lagos on Tuesday, September 24, 2013. The dividend, which translates to 16 kobo per share, is one kobo higher than the 15 kobo paid the previous year.

Speaking at the AGM, the Chairman of Honeywell Flour Mills Plc, Dr. Oba Otudeko (CFR), said that “since the listing of the company on the Nigerian Stock Exchange (NSE), the performance of Honeywell Flour Mills Plc has been on the ascent in spite of the challenging environment under which we operate”. He pointed out that the numerous challenges faced by the Nigerian economy in 2012 included the decline in the real growth rates of economic activity in both oil and non-oil sectors. Nigeria, according to him, produced less than 2.37 million barrels per day during the first half of the year while the non-oil sector was affected by incidents such as flooding.

Dr. Otudeko said that in spite of all the challenges faced by the economy, Honeywell Flour “achieved strong growth across all brands as reflected by the 20% increase in revenue from N38 billion to N46 billion”. He added that “Shareholders fund and Total assets increased by 9% and 16% to N19 billion and N55 billion respectively”.

The Honeywell Flour Mills Plc Chairman said that the project to realize a 1000mt/day increase in milling capacity by Honeywell Flour Mills was completed around March 2013 which has taken the milling capacity to 2,610mt/day. The full impact of this, according to Dr. Otudeko, has increased “our capacity on Semolina, Wheat Meal and Flour sales volumes which will be fully felt in the financial year ending March 2014”.

According to Odunayo, “by the end of the financial year, our Noodles brand had moved from number 5 within the Noodles category (at 45 market share) to number 2 (at 10% market share) thereby making the Honeywell Noodles to grow by 47% by the end of the financial year to N4.1 billion when compared to 2012”. He said that apart from having positive impact on the bottom line, the Noodles advert, 'Bam Bam la la' won the best use of music in advertising award during the year as adjudged by the Association of Advertising Agencies of Nigeria (AAAN) at the Lagos Advertising Ideas Festival (LAIF).

During the year, the company also carried out an internal restructuring which resulted in the merger by absorption of Honeywell Superfine Foods Limited, formerly a wholly owned subsidiary and manufacturers of pasta and noodles with the objective to achieve a further extraction of value from the already existing forward/vertical integration between the two businesses. This merger/absorption was approved by the shareholders on February 28th, 2013 at the company's Extra-Ordinary General Meeting.

Shareholders who attended the AGM commended the board and management team for their effort and commitment to enhance the company's market share, visibility and profitability. In a unanimous decision, the shareholders re-elected the board led by Dr. Otudeko for another term in office.