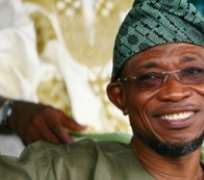 Amid wide belief that governments at the federal, state and local levels were largely responsible for the delay in broadband penetration in the country, Governor Rauf Aregbesola of Osun State has blamed the situation on the parochial interest of telecoms operators to monopolise the telecoms market.

The governor, who spoke at the Nigerian Telecoms Development Lecture (NITDEL) in Lagos at the weekend, said for Nigeria to achieve high broadband penetration, telecoms operators must drop the idea of struggling for market monopoly, where each operator wants to have 'Right of Way' (RoW) because they do not want to share infrastructure among themselves.

'This will lead to harsh competition among telecoms operators and will definitely slow the pace of broadband penetration among themselves,' Aregbesola said.

The event, which was organised by the Nigerian Telecoms News Magazine, is in its 10th year running, and championed by the Publisher, Mr. Abiodun Ajiboye.

'The tendency to have monopoly of infrastructure has forced every telecoms operator to seek government permit for right of way and this has attracted unnecessary harassment from some state and local governments to impose arbitrary levies on the operators,' the governor said.

He called on telecoms operating companies to not only collaborate among themselves over infrastructure sharing, but to also consider partnering with various governments to address the issue of delay in getting approval to Right of Way and as well as the issue if multi-taxation.

Telecoms operators had continued to blame the various governments for the slow pace in broadband penetration, due to delay in granting approval to Right of Way by the state governments on one hand, and due to the multiple taxes imposed on operators by government agencies and social miscreants, on the other hand.

Chief Executive Officer of Airtel Nigeria, Mr. Segun Ogunsanya, who delivered a speech on the topic 'The Nigerian Telecoms Market: Championing the African Course' told the governor that Airtel and other telecoms operators would be glad to partner Osun State on the issue of Right of Way, but pointed out that the challenge was not peculiar to Osun State, but cuts across all other states of the federation.

According to him, Airtel had spent close to N3.9 trillion ($25 billion) on telecoms infrastructure alone and that the company spends N6.5 million per kilometre for settlement of government agencies and social miscreants before laying fibre cables, even after paying for the Right of Way licence.

In a keynote speech, Executive Vice Chairman of the Nigerian Communications Commission (NCC), Dr. Eugene Juwah, said. 'The impact of Information and Communications Technology (ICT) to societal development has always been a subject of interest, not only to the economists but to governments, regulators, development analysts, financial experts, and many other segments of the society', he added.

He said whenever the issue of the impact of ICT to societal development was being discussed, the commission feels a sense of being evaluated. 'This is why we are always interested in participating in events of this nature as it affords us the opportunity to listen to diverse views, opinions and suggestions that would enable us do our job better', Juwah said.