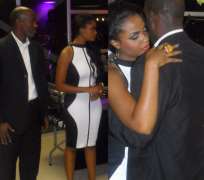 Dilish, The winner of the Big Brother, The Chase, held her birthday party last night and it had in attendance her long seperated Somalia father, Abdi Guyi.

She posted the picture of her and the father on Facebook with the following writeups:

Forget the past Accepts your mistake Cry and move on Thank God Smile always.

A sort of advice to many who find it hard to forgive and reunite with loved ones who've offended them. Nice one Dillish.