As Obama blunders into Syria 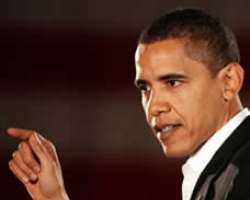 Barack Hussein Obama is probably the biggest dunce that has ever led – sorry misled – America. For those who insist he is Black, I'd say he has become an embarrassing disappointment to we full-blooded Niggers. His shoddy below-average Presidency will probably jeopardize the future election of Blacks to that exalted office, since White folks and other non-Black voters may become wary of electing another such Black nincompoop.

Not only has the inept half-White Nigga-wannabe presided over America's longest high-unemployment recession since WWII, that has failed to recover despite his wasted stimulus billions and flowery teleprompter speeches; his foreign policy blunders, particularly in the Middle east has been disastrous.

Three years ago under the false pretext of protecting civilians and enthroning democracy, he led NATO to bomb Libya and aid Islamist rebels to oust Gaddafi. That North African country has known no peace since then as the central government in Tripoli has no control over large swaths of the country in the hands of armed militias which refuse to disarm.

In the last two years, the ambassadors of all three major NATO allies (UK, France and USA) which partook in that unwarranted assault on a sovereign African nation, have all been attacked by the Islamist terrorists they enthroned. In America's case the 2012 Benghazi consulate attack killed the ambassador and three other diplomatic staff, while Obama fiddled and blatantly lied about the attack being a demonstration against an anti-Islam sex video.

What more, the foolhardy Libyan intervention boosted armed Islamist groups in the region, with looted Libyan arms falling into the hands of Hamas, AQIM, (Al-Qaeda in the Islamic Maghreb), Ansar Al-Dine and our own Boko Haram.

Yes, Obama and his harebrained sidekick Sarkozy, were partly responsible for the upsurge in Jihadist insurgency in both Mali and here in Nigeria. In Egypt Obama supported the ousting of Mubarak and replacement with Muslim Brotherhood's Morsi who turned out to be worse than Mubarak.

Obviously, America's Jihad enabling president has learnt nothing from his ruinous foreign policy misadventures in Libya and Egypt as he is about to plunge the United States headlong into the Syrian civil war on the side of Al-Qaeda linked Islamist rebels who have perpetrated more gruesome atrocitiesthan the forces of Bashar Al-Assad. Among other atrocities the Islamist rebels have massacred Christians, destroyed Churches and cannibalized their victims etc.

Obama's pretext for Syrian intervention is the purported use of chemical weapons by Bashar Al-Assad. The key word here is 'purported', because it is uncertain that Assad's forces were indeed the culprit of chemical weapons attack. Particularly as similar chemical attack earlier this year turned out to have been the handiwork of rebels.

Instructively, Obama took no action against his Islamist rebel allies when they crossed his infamous redline; instead he unsuccessfully tried to pin the March sarin gas attack on Assad. Exactly the same scenario is now playing out as even White House Chief of Staff, Dennis McDonough admits the evidence against Assad isn't conclusive. On the contrary, there are reports that Saudis supplied Syrian rebels with the chemical weapons used in the recent attack to deliberately provoke American intervention.

We've been down this road before where America self-righteously pontificates and scaremongers with outrageous lies to justify predetermined military action… calling a dog a bad name in order to hang it. In Iraq we were told Saddam had weapons of mass destruction, which were nowhere to be found after America invaded.

For the wrongheaded Libyan intervention, NATO propagandists fabricated atrocities allegedly perpetrated by Gaddafi's troops, which investigating human rights groups found no evidence of. Perhaps the most ridiculous of these tall tales was the debunked accusationpeddled by America's UN envoy that Gaddafi handed out condoms and viagrafor his soldiers to rape women.

When Gaddafi deployed troops - as any sovereign nation would - to crush the Benghazi Islamist rebels (like our Boko Haram) who had fought Americans in Iraq and Afghanistan, the late Libyan leader was accused of plotting genocide. Never mind that NATO's 7000 bombing sorties in Libya killed far more people than Gaddafi's troops.

In recent weeks Assad's forces with the help of Iranian and Hezbollah fighters have been gaining ground on their war against Sunni Jihadists. Obama who earlier this year authorized CIA to arm Syrian rebels, doesn't like that. So he, his Jihadist rebel collaborators and their oil-rich Gulf Arab sponsors contrived this chemical weapons ruse to deploy America's military might in support of the beleaguered rebels.

Like a retarded subhuman primate who lacks the intelligence to process several pieces of information and put them in proper context, Obama adamantly refuses to see the holistic big picture in the Syrian civil war as he is unduly hung up about the gassing of a thousand people.

This lends credence to the contention that the chemical weapons ploy was deliberately contrived for the White House community organizer to forcibly depose Assad, having repeatedly bleated “Assad has to go.”

How else does one explain the Jihad enabling American president's willful blindness to the adverse consequences of his ill-advised intervention that could lead to enthronement of Al-Qaeda linked Islamists in Syria, which would then become a terrorist haven with chemical weapons stockpile? That's far more dangerous than Assad remaining in power.

Even the pro-Obama lamestream media New York Timesreports that “nowhere in rebel controlled Syria is there a secular fighting force to speak of.” That info is corroborated by European & American intelligence reports.

None of the Islamist Sunni Arab countries – notably Saudi Arabia and Qatar - funding and arming the Syrian rebels is a democracy, yet Secretary of State John Kerry, senator John McCain and other see-no-Jihad nitwits parading America's corridor of power insist the Syrian rebellion is all about secular democracy.

The troubling implications were completely lost on the obtuse totally clueless John Kerry when he shamelessly informed U.S. Senate that Saudi Arabia and other Gulf Arab nations would foot the bill of America's military intervention. In essence the U.S. military has become bought-&-paid-for mercenaries for the oil-rich Gulf Arabs whose Jihadist rebel minions in the Syria couldn't get the job done.

Obama wants us to believe his proposed intervention would be a limited strike with no intention of regime change. We were sold that dummy in Libya, where UN resolution 1973 only authorized no-fly-zone over Benghazi to protect civilians. Obama, Cameron and Sarkozy's NATO however went way beyond that mandate to arm Libyan rebels and bomb Gaddafi out of power.

Over a hundred thousand people have been killed in the two and half year Syrian civil war, i.e. more than a hundred times the number reportedly killed by the recent gas attack. The actual number of chemical deaths is much lower than Obama's hyped 1,429. Estimates from Doctors without Borders, UK and French intelligence are all less than 400.

Nonetheless, is the Indonesian impostor in America's White House telling us it's alright to kill people with bombs and bullets as well as slit their throats with knives as rebels have videotaped themselves doing, but it is somehow abhorrent to kill with chemical weapons?

If you ask me, I'd say killing with bombs & bullets are worse, because the chances of surviving a chemical gas attack (particularly with good wind) are much better than surviving bomb blasts or Obama's coming Tomahawk cruise missiles.

The bumbling White House cretin should be more concerned about stopping all bloodshed in Syria – chemical or non-chemical. That is unlikely to happen if America escalates the conflict by attacking Syria, as both Russia and Iran have pledged to stand by Assad. Russia has even dispatched additional warships to Syria, presumably to bolster Assad's forces.

Hezbollah, the Iranian proxy terror group is probably already warming up for revenge attacks against American targets as Assad has promised retaliation. Consequently, like in Libya, far more people will die from Obama's reckless intervention than would be saved.

Ban Ki Moon, the UN secretary General made similar point when he not only warned that American military intervention would exacerbate the Syrian conflict, but also insisted that without UN authorization such strike would be illegal.

Whether in Libya, Egypt or Syria, Obama bin Laden has repeatedly demonstrated poor judgment in the Middle east where he is often on the side of Islamists. Four years ago, when mostly secular Iranians revolted against their Mullah tyranny for stealing the country's presidential elections, Obama was loudly silent.

The dimwit Jihad enabler should get his priorities right in the Middle east. Iran's nuclear weapons program is much more of destabilizing threat to the region, yet he has no redlines on that. As Wikileaks disclosed, even the Sunni Gulf Arab nations lobbied America to take out Iran's nuclear facilities.

Not to forget the continued ethnic cleansing of Black African Nuba people by the racist Islamo-Arab tyranny of Sudan's Omar El-Bashir.

Perhaps America's blundering community organizer-in-chief hopes to distract from the woeful economic failures of his inept scandal plagued administration - Benghazi, IRS, Fast & Furious, Solyndra etc. If so, Americans aren't buying it as they are war weary and overwhelmingly opposed to their country's involvement in another Muslim war.

Other than look out for the well being of Christians and other religious minorities caught in the middle, I strongly suggest Caliph Obama heeds Sarah Palin's advice on Syria – “let Allah sort it out.”