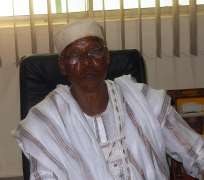 The Organized Labour in Delta State yesterday commended Governor Emmanuel Uduaghan for building an affordable workers village to be occupied on owners occupier basis in the state .

The commendation was made by the Chairman of the Nigeria Labour Congress, NLC, Comrade William Akporeha and the Trade Union Congress, TUC Chairman, Comrade Mike Arinze during an inspection of the project site for the building of 150 housing units for civil servants at Ibusa.

In the words of the NLC Chairman, “ with what we have seen around here, with the plan on ground, this project is highly commendable.. I have never doubted the ability of the State Governor, Dr. Emmanuel Uduaghan in terms of issues and matters that affect Labour in this state and this initiative he has taken has further given us the impression that he will never abandon us as he has never abandoned us .”

”Our prayer therefore is that we hope that the governor will see to the full completion of this project, because we have seen in the past when government come with a pack of projects and they are not completed, But the Commissioner for Housing stand on his honour that this project will be completed in six months and we pray to God to keep all of us alive to see the project completed and the glory will go first to God and the governor of the state,” he noted.

The Chairman of the Trade Union Congress, Comrade Mike Arinze maintained that from what he has seen it is very impressive, adding that, “ it is a major step in bringing houses for Deltans and workers in particular”.

“I want to allay the fears of workers that this project is not going to be hijacked by any group, the major beneficiaries are workers. The Commissioner for Housing has assured us in strong terms that workers are going to own the houses.

“This is a very good step in the right direction and I want to say organized Labour will support the Ministry of Housing to ensure that it is delivered on time,” he added.

In his remarks, the Special Adviser to the Governor on Labour Industrial Relations, Hon. Mike Okeme said the houses which the government is putting in place will be affordable for the workers.

“We will ensure that the worker's salary will enable them to afford and access the houses being built.. Let me commend the Commissioner for Housing on behalf of my office for the focus, dynamism and for being people oriented. He is the one pushing to see that we have a befitting structures on ground. We want to appreciate his office.

The Commissioner for Housing, Chief Paulinus Akpeki who took the Labour leaders round the project said since the creation of the state, apart from the junior quarters, “we don't have the total number of housing estate put together that we are building here today.

“The government of Governor Emmanuel Uduaghan has decided that as from now houses will be built for the teeming workers in the state, even when they live office they will have their own house. This houses will be given to them on ow3ner occupier basis through a mortgage that will be arranged to ensure they all own their homes ,” he noted.

While assuring the Labour leaders, Chief Akpeki said, “this project we have embarked on is the first phase and by the grace of God, we will meet up with the six months completion time from the day we move to site.”

“ As you can see, I moved in here some weeks ago to do the site clearing , we are doing the earth road we are doing the drains now. As I speak with you in the next one week water will move in here, electricity will move in too. By the time we finish the land preparation as approved by the State Executive Council the contractors will move in,” the Commissioner disclosed.